Dina wrote a thoughtful post about her experience on September 11, 2001 in DC and her feelings about the subject, which inspired me to jot down a few, less eloquent, thoughts.

All week VCU has had several white erase boards, post-its and pens available for students to write where they were on September 11, 2001 and how it has affected them. I was working in the Psychology department at the reception desk when I heard. I couldn't believe it. Even though we were safe in Richmond, I immediately called my family, eyes watering, to make sure they were okay. After work I spent the remainder of the day in class or with my sisters.

Everyone was scared and overwhelmed, especially those with families in Northern Virginia and New York City. Thankfully no one I knew at the time lost anyone, though later I came to know people who lost friends and family or experienced the fall out directly while living in NYC. It was such a blessing to be with friends and have family nearby when everything felt turned on end. It also was a blessing to have been so sheltered from the direct events.

My closest contact came a few weeks later when for my birthday Jaime took me to the 9:30 Club to see John Mayer perform. When we drove past the Pentagon with its gaping hole to get to the venue it jarred us into silence. Later living in NYC I saw "Ground Zero" a few times. The enormity of the absent towers never became less overwhelming.

Some things just can't be fixed. I don't think our Nation will ever be the same. What happened was shocking and uncomfortable to consider then and it still is. I can't believe it has been ten years, though seeing that a lot of VCU's current students were in elementary school at the time brought that point home in a whole different way.


Today I hope that those who were lost September 11, 2001 are resting in peace and that those who remain have found or find peace. “Peace. It does not mean to be in a place where there is no noise, trouble or hard work. It means to be in the midst of those things and still be calm in your heart.” - unknown

P.S. Sally Schmidt gives a New York perspective at The Improvised Life. I saw it after I published this and decided to add it as it is worth sharing too. I like the idea of "[fighting] back with beauty." 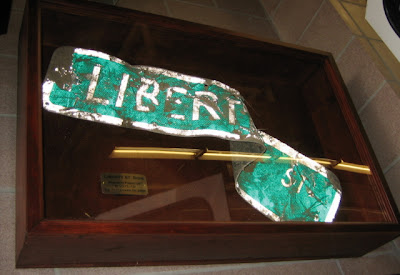