I hope you had a day filled with happiness and good times with loved ones. Here are some photos from my Christmas Eve and Christmas including some gratuitous photos of myself in another thrifted outfit. Thank you for indulging me this year by reading! 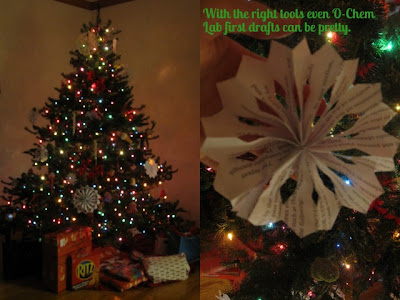 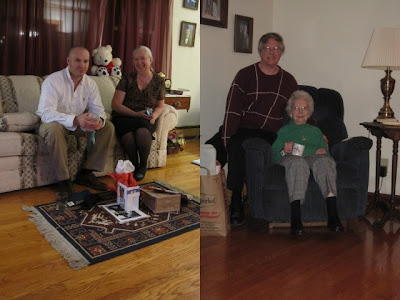 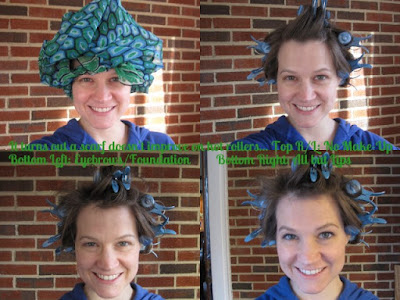 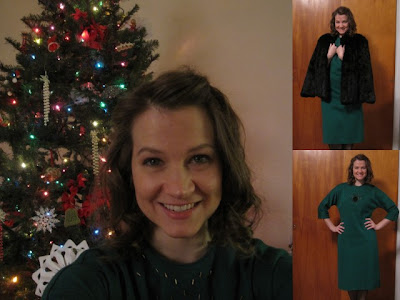 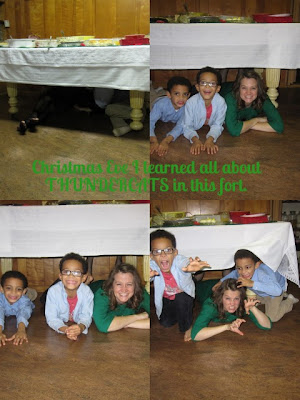 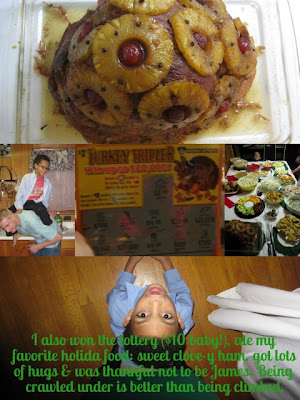 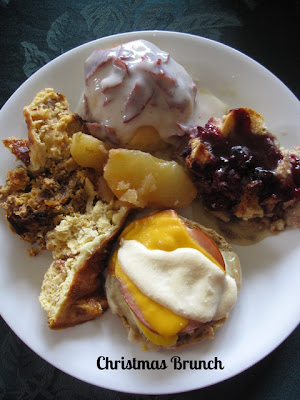 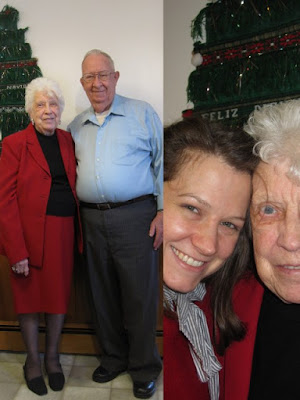 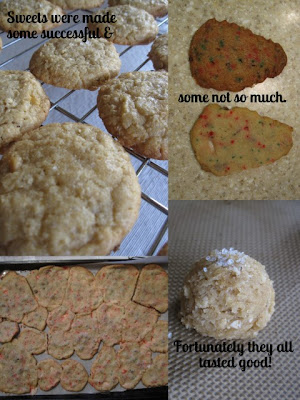 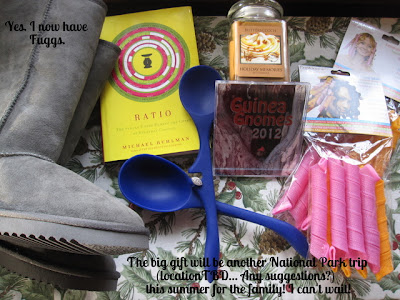 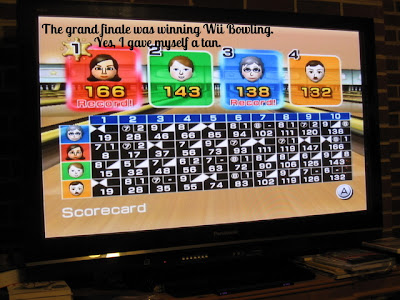 Meg notified me that Richmond, Virginia has been proclaimed the capital of Tacky Lights. Thanks CBS Sunday Morning for spreading the word and showing me light displays I haven't seen. Our neighbors are on the official list, but the houses in the video put their display to shame.

This watch from 1928 is beautiful. I think we were meant to be...Sapphires are my birthstone after all. ;) (via Zuburbia)

Precocious was meant to describe kids like Alec Greven, who wrote How To Talk to Girls. (via Motivation Into Habit)

Fairway, which is right up there with Sahaldi's in Brooklyn Heights as, my favorite grocery store in the NYC area is now online. Yum. 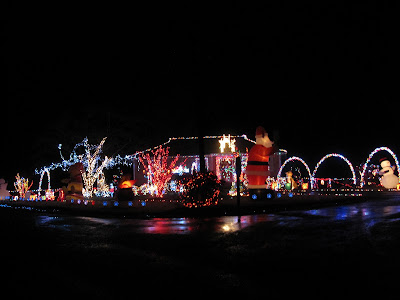 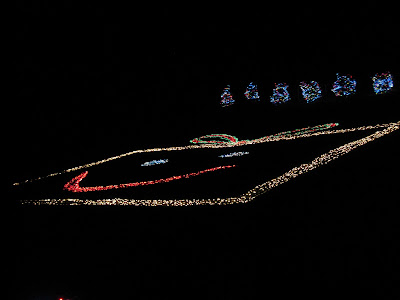 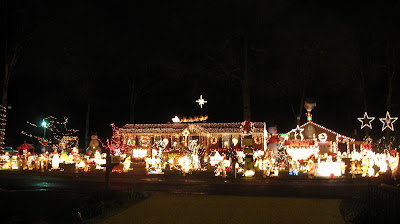 Have Yourself A Merry Little Christmas from Meet Me in St. Louis is my favorite Christmas song after those in The Nutcracker. Read its history and listen to it here. The song begins at 00:36.
Posted by Sarah at 12:30 PM No comments:

Our Daring Cooks’ December 2011 hostess is Sara from Belly Rumbles! Sara chose awesome Char Sui Bao as our challenge, where we made the buns, Char Sui, and filling from scratch – delicious! And I'm only a week late telling you about it.

Sara performed exhaustive research: testing marinades, grilling, searing and baking and baking char sui and then making several variations on buns: baked, steamed and vegetarian. You can see all of her work here. I used her alternative marinade without red food colouring or maltose and made the I-don't-want-to-go-to-the-store substitution of Sherry for Shaoxing Cooking Wine. As Sara said grilling gave the best result, I had my Dad work his magic on the pork with a result so beautiful that I was almost sad to dice it to create the filling for the buns.

The hardest part was figuring out how to steam buns without a bamboo steamer. Ultimately, I used a vegetable steamer insert in a large stock pot removing the lid as quickly as possible when steaming finished and drying it before replacing it over the next batch. This minimized condensation droplets hitting the buns and prevented unsightly blemishes. It also made me feel a bit like a magician!

This challenge took some time, but was surprisingly easy and my buns tasted just like the cheap, tasty, steamed buns I used to purchase in NYC's Chinatown. I highly recommend it; the recipes I used are below the photos and Sara's other variations can be found at the above link. 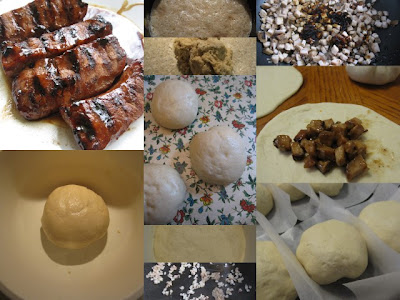 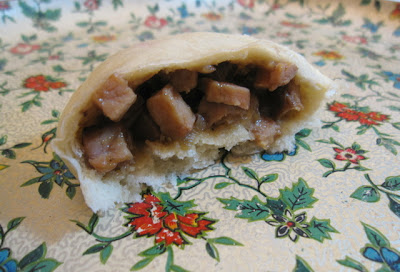 12 Christmas Trees Made Out of Books... I can't believe it is almost Christmas! (via Courtney who retweeted Kay Steiger)

I was naive to think eugenics were limited to the Nazis during WWII. "States began practicing eugenics in earnest in the United States in the 1920s and ’30s, driven by a philosophy of social engineering once so popular that President Woodrow Wilson, Justice Oliver Wendell Holmes Jr. of the Supreme Court and Margaret Sanger, the founder of Planned Parenthood, were ardent supporters." Thousands Sterilized, a State Weighs Restitution

Victoria’s Secret Revealed in Child Picking Burkina Faso Cotton is heartbreaking, but to play devil's advocate... Shouldn't they get some credit for trying to use ethically grown cotton? Gosh knows where the cotton in my less expensive undergarments originates... Hopefully this issue can be resolved and they will continue supporting the region as I can't imagine the profiled worker's life getting better if they don't. (via Jaime and Carielle) 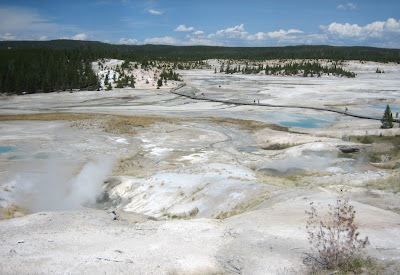 
The Nutcracker is Christmas and the Waltz of the Snowflakes is my favorite piece from it. Growing up I wanted to perform the Snow Queen's the pas de deux.... That said this version doesn't have a snow queen, but hopefully you will find the sheer multitude of grand jetés as entrancing as I did.

I always have wondered why older cheeses had sharp granules; Epi-Log explains.

Damn You Auto Corrects Top 25 Funniest Autocorrects of the Year made my eyes tear up from laughing so hard. It felt great. Don't click through if you don't find raunchy humor amusing. (via Alison)

Evan Ruggiero is inspiration to never give up... After osteosarcoma, multiple related surgeries, chemo and the amputation of his right leg below the tibia he is back to tapping. His inspiration is Peg Leg Bates. (via Meg)

"People like the farmer Joel Salatin, the cantankerous hero of Michael Pollan’s best-selling The Omnivore’s Dilemma, are routinely held up as visionaries for the kind of complete-nutrient-cycle, sustainable-agriculture operations they run in the comfortable United States, but Africa’s urban farmers are doing the same with far, far less." The Constant Gardeners by Joceyln C. Zuckerman

Motivation Into Habit provides some much needed fitness inspiration. (via Lara) 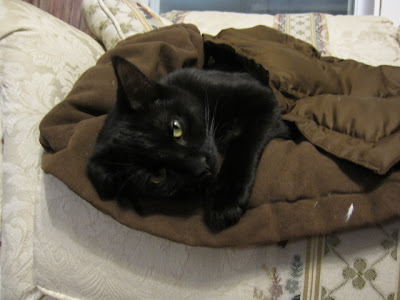 Ain't No Sunshine (Album Version)
Bill Withers' Ain't No Sunshine is much better than Bruno Mars' It Will Rain and has a very similar theme. Am I alone in not enjoying Bruno Mars? I change the radio station every time one of his songs plays.
Posted by Sarah at 12:30 PM No comments:

Scott Amron has developed a sticker that dissolves to clean the fruit it labels.

Hedy Lamar, who I've always found stunning, was also  patented "a frequency-hopping technique [in 1942] that is found in most digital devices that communicate wirelessly today." Her biography has been added to my endless reading list. (via Curtis)

Speaking of stunning, Carmen Dell'Orefice is still living life to the fullest and modeling at 80(!).

An ice cream Eiffel Tower, insight into the creation of Häagen-Dazs and a discussion of General Mills' international marketing strategy for the brand (or what their strategy was in May).

There is a Sweet Valley High movie in the works from Diablo Cody. My interest is piqued, but we'll see if it goes further than my interest in Sweet Valley Confidential months ago. I still haven't read it and looking at its Amazon reviews I shouldn't bother. (via Emily Miller)
Recipes Bookmarked
Easy Melted Brie with Honey and Herbs at NPR
Quick-Roasted Green Beans And Shallots With Garlic And Ginger Juice at NPR
Meringue-Topped Sweet Potato Casserole at Eating Well
Cracking the Poached Egg Code at NPR's Kitchen Window ... before you poach watch Harold McGee's 40-second method to determine your eggs' age! 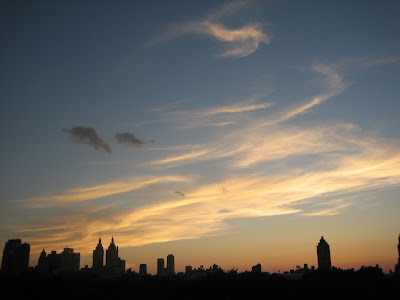 Sunset on The Metropolitan Museum of Art's Rooftop, NYC, August 2006
(Missing the city! This is likely to be my first year missing the Christmas decorations since 2004!)

kick it Stereoheroes remix
Posted by Sarah at 12:30 PM No comments: