Simple September continues with this Lazy Mexican-Inspired Salad. I was going to tell you this was my go to dinner, but then I entered its information into Self's Nutrition Data website and discovered it is probably a bit light for dinner. :/ So I suggest that you think of it as a side salad. I know I will from here on out.

That said my finding it satisfying as dinner or lunch for several years now is proof of how filling and nutrient dense it is. Self quantified that fact too. Its only downfall, according to the nutrition facts, is high sodium. This isn't a big surprise since it involves prepared foods. If you want to reduce the sodium, you can make your own dressing, perhaps a cumin-lime vinaigrette like the one I used here, and/or prepare black beans from dried beans instead of using canned. Personally sodium is not a concern when I'm eating this. My concern is eating something good and satisfying, then getting the heck out of the kitchen.

If I had more time I would have a cooking adventure instead of this salad to post, but organic chemistry and some other things are ruling my life. Given how much I've been eating this thank goodness I like it! To mix things up a bit I add tomatoes, corn and/or cilantro, but the basics are below.

1. Open, rinse and drain one 14 ounce can of black beans.
2. Remove stem and seeds from green pepper, then chop it roughly or neatly your call.
3. Measure two cups of salad into a bowl, then measure out 1/2 cup of black beans and place them on top.
4. Add 2 tablespoons of the reduced fat cheese to the bowl and the chopped pepper.
5. Top with 1 tablespoon of ranch dressing.

P.S. My friend Katie thought I should let y'all know this isn't a racial slur. I am lazy...not Mexicans... I didn't even realize there was a racial slur. In fact I probably would say Mexicans were hard workers based on other stereotypes of their life - being illegal immigrants in the US. 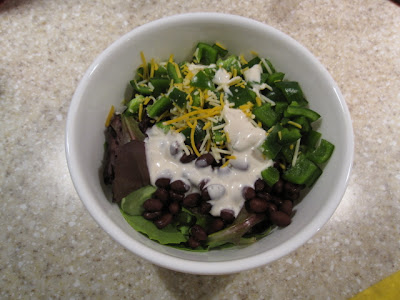