A few weeks ago I bookmarked Kelly at Eat Make Read's Grown-Up Jalepeño Poppers. Her version made the treats I remembered slightly healthier by removing the breading while keeping the creamy, warm cheese that tones down the Jalepeno's spice so well. She also added goat cheese for a more unique flavor.

Since I had poblanos in abundance from Red Dog Farm, and to be honest can't handle jalepeño level spice, I decided to substitute them. The poblano's spice is more subtle - it grows on you rather than punching you. Then I started thinking about how to add another vegetable to the mix (because I like thinking I'm being healthy) when it dawned on me - Spinach-Artichoke Dip. The filling would remain creamy and cheesy while gaining some nutrients.

The first time I made the dip I used goat cheese in place of the parmesan, but it overpowered the popper making it all goat and spice. It turns out cream cheese and parmesan really is the way to go for spinach artichoke dip, though in the end I did add water chestnuts for an unexpected crunch.These poppers go down easy and are easy to whip up too. If you are pressed for time, you could make things even easier by filling them with pre-made Spinach Artichoke Dip. I promise not to tell.

1. Preheat oven to 400 degrees Fahrenheit. Line a large baking sheet with foil. Halve the poblano peppers, removing seeds if desired, and place them on the sheet one to two inches apart.
2. Heat the teaspoon of olive oil in a nonstick pan on the stove over medium heat. Once it sizzles when water is flicked at it, add the onions and garlic. Set a timer for three minutes and stir periodically.
3. Rinse spinach. When the timer goes off, add the slightly damp spinach to the garlic and onion mixture. Cook until the spinach wilts and the onions are translucent. Remove the mixture from heat to cool.
4. Combine the cream cheese, parmesan cheese, salt, water chestnuts and artichoke hearts in a bowl. Use kitchen scissors to further break up the artichoke hearts, then stir to combine.
5. Pour the spinach mixture on top of the cheese mixture. Use kitchen scissors to roughly chop the spinach to break it up. Stir to combine.
6. Scoop the spinach-artichoke dip into the waiting poblano peppers so that it peeks up over the edges. I used a half tablespoon scoop for this and it worked great.
7. Place the baking sheet in the oven and bake for 30 minutes until peppers begin to brown around the edges and the cheese is bubbly. 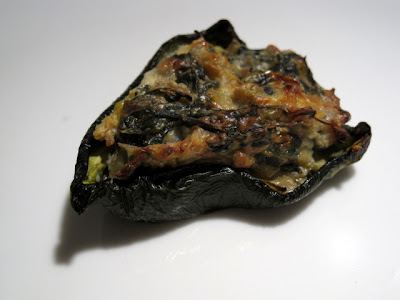 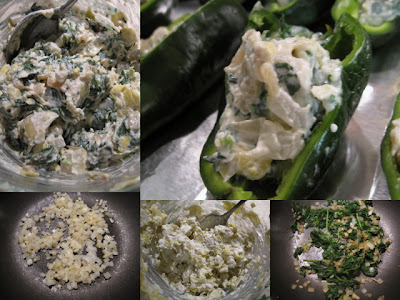