When I said I was making Lois Freedman of Jean-Georges Management's Corn Pudding as part of dinner there was excitement... Until I read Mom the directions. At which point she emphatically said "That isn't corn pudding. It is corn casserole, corn compote or something else... Don't tell your Dad it is corn pudding or he will be disappointed."

You see here in Virginia, corn pudding is an eggy, creamy custard-type dish that has always been too sweet and heavy for my taste. This recipe doesn't require any eggs, cream or much of anything beyond fresh, grated corn. It is heavenly, summer sunshine compacted into soft, sweet bites. Think of creamed corn without the gloppy cream.

No one was disappointed. In fact, I liked it so much that I ate a smaller portion just so I could have more the next day. I used Seredipity corn from Red Dog Farms, a juicy, sweet bicolor variety, and as directed added the salt and butter to taste. I left the cayenne pepper and lime juice on the side since not everyone likes spice in our household. Adding them is tasty too, but they aren't necessary.

1. Preheat oven to 350 degrees Fahrenheit.
2. Place a box grater on a medium cast-iron pan and grate each ear of corn directly into the pan. I found holding the corn horizontally and moving it diagonally to be the quickest way to grate. Discard the cobs.
3. Spread the corn evenly across the pan and bake until the edges and top are golden brown and the corn milk has thickened. For me this took 35 minutes.
4. Remove from heat. Stir in butter and salt to taste. If desired, season with cayenne pepper and a squeeze of lime juice. Mix well. 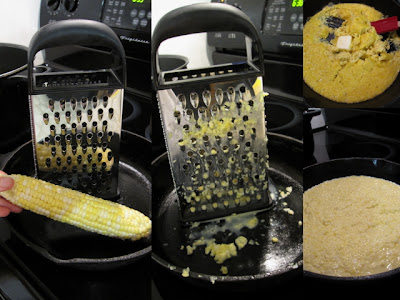 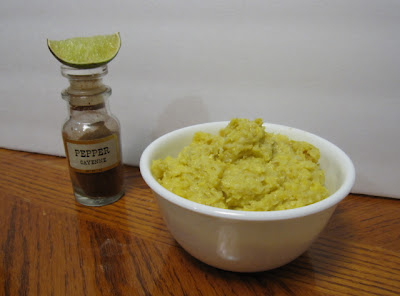