Amelia Earhart was much more than an aviator. She designed a fashion line and had other careers.

John Tierney's Do You Suffer from Decision Fatigue (NY Times) reviews some fascinating social and neuroscience research about willpower. Here's an excerpt... "The discoveries about glucose help explain why dieting is a uniquely difficult test of self-control — and why even people with phenomenally strong willpower in the rest of their lives can have such a hard time losing weight. They start out the day with virtuous intentions, resisting croissants at breakfast and dessert at lunch, but each act of resistance further lowers their willpower. As their willpower weakens late in the day, they need to replenish it. But to resupply that energy, they need to give the body glucose."

Lucite for handbags was sourced from damaged nose cones of airplanes scrapped after World War II. For an article about them and great pictures, go here. Deco Jewels, the store they reference in New York, is fabulous. It also was out of my price range. (via Zuburbia)

Initially I skipped the Frank Bruni's Unsavory Culinary Elitism (NY Times) because I don't keep up with Anthony Bourdain or Paula Deen. Then Lizzie mentioned it. It is definitely worth a read and Jane Black has an equally well-written and thoughtful response: Can Food Network Chefs Help Solve the Obesity Crisis? (The Atlantic). 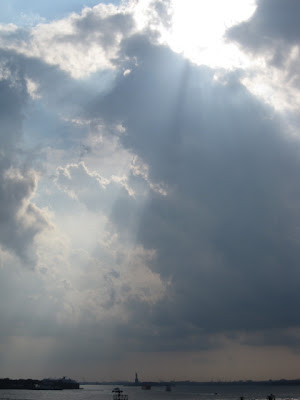 The Sky Even Makes the Statue of Liberty Small, Brooklyn, NY August 2011
Find more A B & The Sea songs at Myspace Music
Leslie recommends this band! From a first listen through their songs on myspace their sound made me think of the Beach Boys, the Beatles and The Wonders (Yes as in That Thing You Do!). Promising.

Also! I'm so afraid of natural disasters that I would rather not think about them. While the earthquake was fairly close, I was somehow was earthquake proof except for the 1 a.m. aftershock when it woke me up Thursday. Fortunately everyone I know who was closer is safe and their damage is superficial only. Next up Hurricane Irene... Keep safe (and dry) this weekend!
Posted by Sarah at 12:30 PM