Last Monday I joined Meg and Lara at Rouge Tomate to partake in Restaurant Week, which offers a prix fixe three-course menu with two or three choices per course at some of the city's best restaurants.Rouge Tomate has a warm, modern appearance -- very airy with lots of wood, vases of apples lining the walls and red uplighting.

As per their Web site, the restaurant is the first to fully comply to Sanitas Per Escam (Health Through Food), a nutritional charter developed by chefs and dietitians that focuses on providing optimal nutrition with optimal taste. Healthy cooking that tastes as good as theirs is definitely something to aspire to (how I would love to spend some time in that kitchen!); every dish features complex flavors that unfold as you eat.

Unfortunately the service was less than stellar. Usually with Restaurant Week the restaurant pushes you to finish quickly. Our experience at Rouge Tomate was the polar opposite; we had a leisurely meal that lasted 2+ hours. We sat for 30 minutes before our order was even taken. From that point forward, the table was bussed efficiently and water refilled but each course took a long time to come out. Needless to say, we were ready to go by the time the check reached us. But let's go back to the food.

Currently each table is started with a super smooth spinach-almond butter and a plate of subtly jalapeño spiced whole wheat bread as well as more traditional sourdough. The chef also sent out an amuse-bouche of rutabaga soup with apples, which was rich and warm with the spicy vegetal flavor of rutabaga. If the apples had retained a bit of their crunch I think the soup would have benefited.

My appetizer was Tombo Tuna Poke with Asian Pear, Watermelon Radish, Oyster Mushroom and Sesame; from what I can tell a tuna poke is like tuna tartare without the carefully molded shape. It's a light appetizer where the tuna's silky texture contrasts nicely with the sesame seed, pear and radishes crunch. The pear's sweetness and radish's bite helped cut the heaviness that sesame oil can sometimes impart.

I couldn't reach Lara's Cranberry Bean Soup with Chorizo to taste it, but I did taste Meg's Chickpea Hummus with Roasted Peppers, Olive, Sesame and Flat Bread Crisps. The hummus was very smooth, though perhaps a touch oversalted, and the artfully arranged toppings allowed you to make each bite taste different. The flat bread was almost Zatar-like with an intense blend of spices that easily overwhelmed the hummus.

Lara and I both ordered the Atlantic Hake Fish with Winter Bean Stew, Fennel, Lacinato Kale and Provençal Oil for our main course. The fish was melt-in-your-mouth flaky perfection complimented nicely by the stew's beans, which broke up the smoothness of the fish and provençal (french olive) oil. Meg ordered the Cauliflower Risotto with Heirloom Cauliflower, Parmesan, Garlic, Lemon Confit. It was tasty but overwhelming as a main course with its tangy flavor that left the mouth dry like drinking a dry red wine.

To cleanse our palates, the Chef sent out kiwi sorbet. It was creamy, pale, free of seeds and had a crisp apple-like finish that left me refreshed and ready for dessert. I enjoyed the Market Apple Rosemary Shortcake with Golden Raisins and Buttermilk-Lemon Ice Cream. The buttery caramel sauce surrounding the shortcake and the apple balanced out the very rosemary dense shortcake well, but the tangy, sweet buttermilk-lemon ice cream was my favorite part. It was the perfect finish - sweet without being too much.

We also had amazing, innovative cocktails ($12 each). Meg and Lara enjoyed the Pear Crisp (Ten Cane Rum, White Pear Purée, Fresh Vanilla, Lemon, topped with Prossecco), which tasted crisp (obviously) and sweet almost like Apple Jacks. I had the Queen's Cup (Pimm’s, Cucumber purée, Mint, Lemon Juice), which was light and relaxing after a long day. I would love to go back and try some of the others; they had a whole section devoted to non-alcoholic cocktails as well since Rouge Tomate also has a juice bar.

If you have patience for the service and a penchant for fairly healthy creative food, I would recommend Rouge Tomate.

I know these photos aren't great but I don't like intruding on other people's dining experience with my camera's flash. These were taken using my camera's highest ISO setting to give an impression of the presentation. 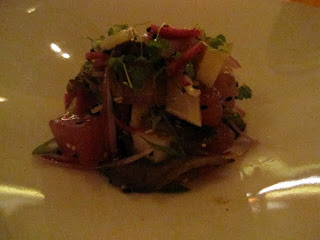 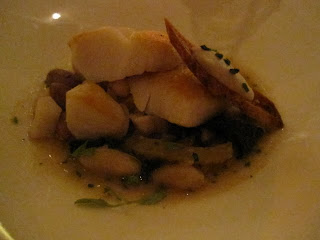 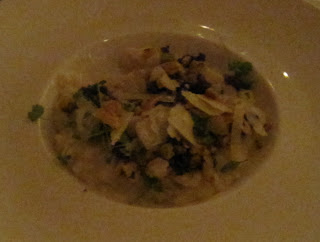 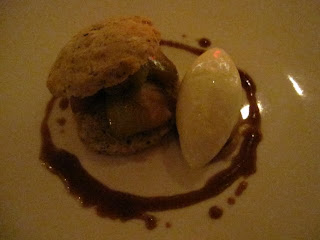