Baked Shrimp with Tomatoes and Feta

While researching Mezze I found this Baked Shrimp with Tomatoes and Feta recipe. It seemed like the perfect use for (some of) the excessively large pound of feta I purchased at Whole Foods, the frozen shrimp in my freezer from I don't even want to tell you when and the leftover parsley. But there weren't enough hours for me to throw it into the Mezze mix, so I left it for this past weekend. If you like these ingredients, I don't think you should wait a week to make it.

This dish is rich and tangy thanks to the tomato and feta, slightly sweet from the cooked onions and garlic and you can actually taste the dill's pungent flavor, though not the parsley. In combination the flavors make my taste buds perk up with each bite. I recommend not using pre-cooked shrimp or after 12 additional minutes of cooking time they'll shrivel into imperfect little pink lumps. Then again you could just mix them in after pulling the skillet out of the oven and let it rest 5-10 minutes so the shrimp heat up.

Yesterday as I packaged up the bits from my halved version with brown rice I was going to say it made only three servings not four. Then I had a portion for lunch and was perfectly full with less than 2 cups of the Baked Shrimp with Tomatoes and Feta over Rice. The half bag of Butterscotch candies I consumed may have have helped with that sensation though so who knows? Either way I know I'll make this recipe again. 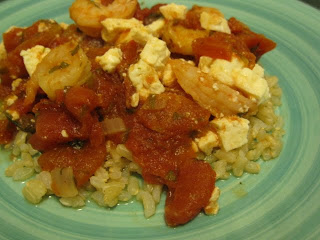