Caper-Pea Risotto with a hint of Mint

Friday Britt, one of my oldest friends, came up to visit for the weekend. Since his train from Phillie arrived on the later side and he wanted to chill out with wine anyway, I made dinner.

I had been contemplating something mixing capers and peas since December but am always slow to attempt "original" recipes. The risk of wasting ingredients on something potentially inedible isn't appealing to me, especially not when cooking for other people, but I knew as a Southern gentleman that Britt would be kind regardless of the result.

I adapted the below recipe for risotto from Sally Schneider's A New Way To Cook (thanks for the book again Jaime!) to include capers, peas and mint. It was a successful risotto in my opinion, although I may play with the proportions in the future. The capers' tanginess does a good job balancing out the peas' sweetness while cutting the risotto's creaminess and the mint makes it all taste fresh and bright.

Directions
1. In a medium saucepan, bring the broth to a boil over high heat; lower the heat to maintain at a simmer. (I always skip this and it seems fine, so eh.)
2. In a large heavy saucepan, melt the butter with the olive oil over low heat. Add the shallots, cover, and cook, stirring occasionally, until translucent, about 4 minutes. Uncover, increase the heat to moderate, and cook, stirring until the shallots are golden. Add the rice and cook, stirring constantly, until the grains look chalky with a white dot in the center of each, about 5 minutes. (Do not allow the rice to brown.)
3. Add the wine and cook, stirring, until it has been absorbed by the rice. Stir in 1/2 cup of the broth. Cook at a very low boil, stirring frequently, until almost all of the liquid is absorbed, 3-5 minutes. Continue adding the broth in this fashion, a 1/2 cup at a time, cooking and stirring until the grains of rice are tender yet still firm in the center and the risotto is creamy but not soupy, about 25 minutes.
*I added the peas, capers and mint after the last 1/2 cup of broth had reduced about halfway.
4. Remove the saucepan from the heat and stir in the sour cream and 1/4 cup of the cheese, and season with salt and pepper. If you wish to add herbs, stir them into the risotto. You can stir any other embellishments into the risotto or spoon some-ragus, for example-right in the center of each serving. Serve at once, passing the remaining 1/4 cup of cheese on the side. 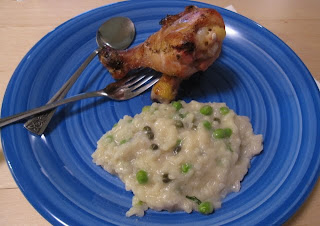 (Yes, I needed something else on that plate but I didn't have anything on hand to make a small salad. Or perhaps I should have made a bigger pool of risotto and stuck the chicken on top. Either way at least it tasted good.)
Posted by Sarah at 12:30 PM