Last Saturday night I felt super ambitious and decided to adapt not one but two cupcake recipes to make Apple Cider Cupcakes. Because I really needed that many cupcakes. It took a couple days and a little effort to give them away but the cupcakes are all gone at this point.

They, and kale chips, were the perfect accompaniment to viewing age inappropriate movies with friends, who I won't incriminate. Fortunately I had already seen High School Musical 1 and my taking on too much baking didn't make me miss out on anything new since I finished in time for the hilarious HSM 2. Next up is HSM 3 with either 17 Again or Grease. I'm so 28 going on 12 sometimes.

While both cupcakes were good, I felt like the Apple Cider "Mupcakes" (recipe below) were the clear winner: moist, light and not too sweet with delicious chunks of apple inside. They didn't even really need frosting though I certainly iced them with a Caramel Buttercream that I could, and did, eat by the spoonful.

The regular Apple Cider cupcakes, adapted from this recipe which I made last May, domed beautifully just like the original cupcakes with Bailey's. However, they didn't taste like apple cider and were a little dry and crumbly. Perhaps I should have balanced the ingredients differently. Maybe some other time.

Directions:
Preheat oven to 350. Line or grease and flour 12 wells in a cupcake pan. In a large bowl, cream the butter and sugar. Add the egg, mix thoroughly. Add flour, baking powder, cinnamon, and salt to the butter mixture. Add the greek yogurt and apple cider to the rest of the batter and beat until well combined. Fold in apple. Fill each well 2/3 of the way full. Bake about 15 minutes or until a toothpick inserted the center of a cupcake comes out mostly clean. Cool briefly in the pan, then remove cupcakes to wire racks to cool completely before icing. Ice.


Caramel Buttercream
For the caramel buttercream, I made Chef Jane's caramel sauce, which is the easiest caramel I've ever made; it doesn't even require butter. While it cooled, I creamed a room temperature stick of butter. Then I added spoonfuls of caramel sauce, 1/2 cup portions of confectionery sugar and splashes of half and half to taste. The end result was rich but not overwhelming. I don't feel right posting Chef Jane's recipe but I will tell you this one is pretty similar. 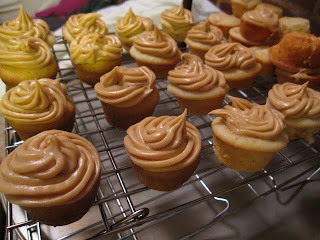 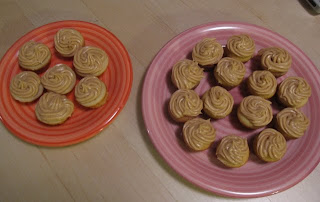