Ready for the weekend? I always am... To help you pass your Friday here are the highlights of what distracted me this week online, what I bookmarked that I hope to one day eat and a picture.  Happy 4th of July!

Two different ways to look at your food: Wild Food, pictures of your food in its natural setting, by Jay Parkinson MD + MPH and, one he linked, Inside insides: Magnetic Resonance Imaging of Foods by Andy Ellison. The artichoke MRI is hypnotizing.

Jamie at From Me To You captured great photos of Michael Arenella and his Dreamland Orchestra's Jazz Age Party last weekend. I'm smitten with this party, as you likely know. I will be there one day in August!

Gone with the Wind, one of my favorite books, was published this month 75 years ago. I'm not sure what inspired me to read it as the movie didn't do much for me, other than creating a love for green velvet, but I could not put the book down. The characters are so well developed! And I so wanted a Rhett Butler after my last reading. Anyway,  NPR's All Things Considered has a five-minute story that gives a bit of background on it. Having read the NPR story and listened to it, I can tell you they are virtually the same so explore the material as you wish, if you wish. (via Jaime)

Creative gardening, again... This garden is vertical, made of gutters and attaches to your house.

If It Were My Home allows you to compare life in two different countries. (via Marginal Revolution) 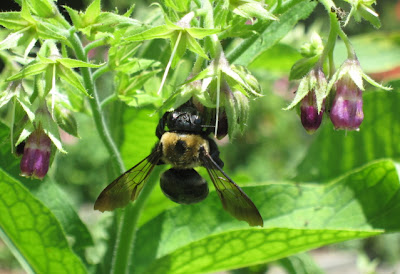 Bumblebee at Red Dog Farm, June 2011
Song of the Week: Doin' Time by Sublime, which makes me remember high school summers spent riding around in friend's cars with lots of bass. Are crazy speakers still cool with high school kids these days?
Posted by Sarah at 12:30 PM