Last year Molly from Orangette wrote about her variation on Canal House's Roasted Rhubarb so convincingly that I had to try it. It was a risky move as I had never had rhubarb without strawberries, but there was reward in its sweet, tart taste. So for a while I reveled in it and then rhubarb was out of season.

Cue Spring in Richmond this year and a dearth of rhubarb. Apparently it is a Northern crop, so it isn't widely anticipated or available here the way it is in New York City. After a few weeks of searching I was resigned to not having rhubarb, then I saw it on Farm to Family's produce list! I squealed and promptly went to pick up some of the red celery-looking stalks.

Molly's original version still is great, but I've tinkered with it a bit halving the proportions, removing the refined sugar and using rum in lieu of wine. With wine you end up with a spare 3.5 cups to drink, which didn't interest me nor did cluttering the fridge with the bottle. Rum can be held for at room temperature in the pantry and it goes well with honey.

This rhubarb has more flavor and is sweeter when cold, so I recommend eating it that way although it eating it while its warm won't hurt you. Enjoy the rhubarb on its own, over plain greek yogurt for breakfast or over popovers, which convinced my mom that "stewed rhubarb" as she was raised eating it was actually quite tasty rather than the mushy, undesirable stuff of her memories.

1. Set a rack in the lower third of the oven, and preheat the oven to 350 degrees Fahrenheit.
2. Pour the honey, rum and water into the bottom of a pyrex dish (a dutch oven or other over-safe pot would work too). Add the rhubarb and stir gently to combine the ingredients.
3. Bake uncovered for 15 minutes, then remove the dish and stir the rhubarb to ensure even cooking.
4. Return the dish to the oven and continue baking it for 15 more minutes.
5. Remove from the oven, cool briefly on the counter and then place it in the fridge to cool overnight. 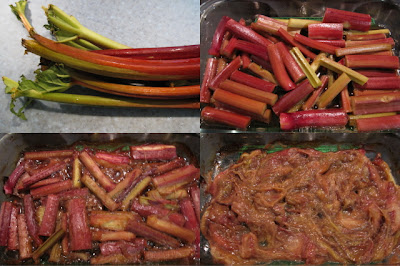 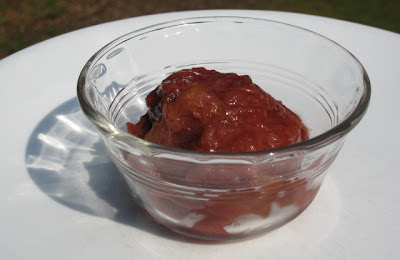 *It looks like David Lebovitz and Sarah Galvin at All Our Fingers in the Pie have done something similar too!
Posted by Sarah at 12:30 PM