Inspired by Julie at One-Wall Kitchen's decision to include maple mousse as a ripple in homemade apple cinnamon ice cream I decided to freeze my leftover mousse and make "ice cream" sandwiches. Cinnamon and maple sounded great, so I wanted to use oatmeal raisin cookies. Needless to say when I spotted the Garam Masala Oatmeal-Raisin Cookies Monica Bhide adapted it was all over.

I halved the original recipe and then going by taste reduced the garam masala by an additional 1/4 teaspoon since my spice tolerance isn't the highest. The remaining garam masala and raisins still provided plenty of flavor to mask my other change -- switching out the white flour for whole wheat as whole grains are good. The resulting cookies are chewy inside with a crisp exterior and a slightly spicy flavor that builds as you eat them.

Making these cookies was so easy I am wondering why I don't make cookies more often...we'll see what happens there. Ha! As for the maple mousse, it was tasty cold but a little chewy once frozen. That won't be happening again.

1. Preheat oven to 350 degrees. Grease two cookie sheets or place Sil-pats on them.
2. Combine the oats, flour, garam masala, baking soda, baking powder and salt in a medium bowl. Set aside.
3. Mix the butter and sugars in a large bowl with an electric mixer on medium speed until creamy.
4. Add the egg and fully incorporate it into the dough. Add the vanilla.
5. Add the flour mixture one third at a time and mixing until just combined after each addition.
6. Mix in the raisins.
7. Using a half tablespoon measuring spoon, place balls of dough onto cookie sheets. Flatten slighty.
8. Bake 12 to 14 minutes or until golden (my oven took 12 minutes). Cool on wire racks. 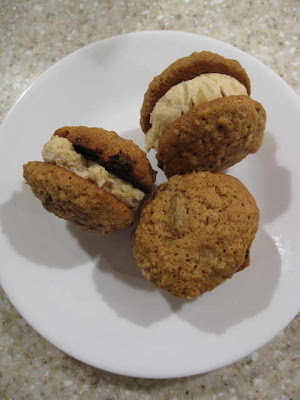 This song is still catchy and the video is still great, even if I'm not bitter about anyone I used to date at this point.
Posted by Sarah at 5:00 PM