When my Alpha Gamma Delta sister-mother, Amanda, served me artichokes junior year at Virginia Commonwealth University I was perplexed by their spiky, dull green appearance and that Amanda, who prefers classic foods, enjoyed them. As I dipped the outer leaves in butter and scraped the tender flesh off with my teeth, scooped out the choke and ate the heart relishing every bite I got it.

And I've loved artichokes ever since. They taste great and are low in calories while providing dietary fiber, vitamin C, folate, magnesium and antioxidants (per OceanMist). When I saw a box of baby artichokes on markdown at Kroger; I had to buy them!  The nice thing about baby artichokes is the chokes (spiky bits in the center) don't need to be removed as they haven't matured enough yet to tickle the throat. I ate some steamed and then decided to get creative braising the excess.

This preparation leaves the chicken incredibly tender while creating a light, savory lemon sauce perfect for coating the nutty wheatberries. The whole dish leaves a natural sweet aftertaste in your mouth and the wheatberries bounce as you bite into them (party in the mouth!) - what's not to love?  Wheatberries aren't for everyone so feel free to substitute couscous, brown rice or another grain of your choice.

Thanks for the introduction to artichokes, Amanda, and for many other things! I got lucky when we were paired up 10 years ago.

1. Bring 2.5 cups of water to a boil. Add 1 cup of wheatberries and return to a boil. Reduce heat to a simmer, cover and cook for approximately 1 hour. At the end of the hour check the wheatberries - if they have plumped up and cracked open they are ready. Set aside.
2. Add 1/2 tablespoon olive oil to the dutch oven over medium-low heat. Once the oil sizzles when flicked with a drop of water, add the onion. Saute until slightly browned adding 1/4 cup of water as needed to prevent burning. Remove to a plate.
3. While the onions caramelize, squeeze the lemon into a small bowl. Mix the agave nectar and ginger into the lemon juice. Set aside.
4. Preheat the oven to 350 degrees Fahrenheit.
5. Salt and pepper the chicken breasts, then place them to the hot dutch oven and brown each side. Remove to the plate. Turn off the burner.
6. Pour 1/2 cup of chicken broth into the dutch oven to deglaze it. Spread the caramelized onions over the bottom of the dutch oven and add the sliced garlic.
7. Place the chicken on top of the onion and garlic. Pour the lemon juice mixture over top. Cover and place in oven for approximately 20 minutes.
8. While the chicken begins cooking, prepare the artichokes by removing their stems and the top 1/4. Cut them in half longitudinally. When 20 minutes has passed, remove the dutch oven from the stove and nest the artichokes into the cooking liquid. Cover the dish and return it to the oven.
9. Bake the dish for approximately 15 more minutes. It is done when the chicken is 160-165 degrees Fahrenheit.
10. Place the wheatberries or other grain on the plate and serve the other elements over it. Salt, pepper and/or Ms. Dash to taste and enjoy. 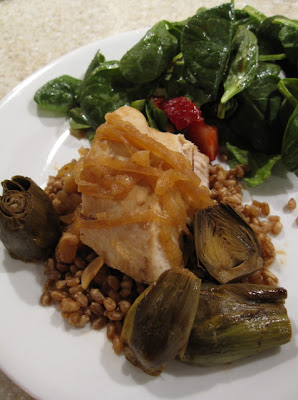 Find more songs from the album Standing in the Way of Control at Myspace Music
Posted by Sarah at 12:30 PM