My first trip out of the country was in 2004. I visited Guayaquil, Salinas, Montanita and Cuenca, Ecuador for New Years with friends, who I hadn't actually met in person yet. The adventure opened my eyes to a new culture and new foods. I will never forget all of the fireworks and exploding pinatas, the variety of car horns you heard navigating the crowded streets, the ocean's bath-like water temperature, the "raining" locusts and discovering just how privileged we are in the US to have the sanitation system we do.

In spite of later trips to Italy, Cyprus and Spain, South American food has stayed in my head. I just can't approximate it as well as the other cuisines. I still dream about the tangy, soup-like ceviche served with popcorn, the creamy, cheesy grilled corn (choclos not to be confused with cholos) available for a dollar on the street, cilantro rice, and fresh pina coladas. Needless to say when Kathlyn introduced this month's challenge by describing her love of South American food's flavor I was excited.

Kathlyn of Bake Like a Ninja was our Daring Cooks’ March 2011 hostess. Kathlyn challenged us to make two classic Peruvian dishes: Ceviche de Pescado from “Peruvian Cooking – Basic Recipes” by Annik Franco Barreau. And Papas Rellenas adapted from a home recipe by Kathlyn’s Spanish teacher, Mayra. You can find the full challenge background and recipes here; the recipes updated with my variations are below.

I've tried making ceviche before but this version turned out much better. It keeps things simple so the citrus cooked fish stays the main event (as it should). I incorporated pink grapefruit into the ceviche for some additional color and reduced the provided recipe by half but otherwise followed it. I'm delighted to say that my Mom's Venzuelan co-worker said it was perfect so congrats to Kathlyn for finding something authentic enough to please a South American.

As for the Papas Rellanas I really went off the reservation. While I read through the recipe and largely followed it, what I made couldn't really be called Papas Rellanas since I made the filling Italian (proscuitto, red pepper, spinach and mozzarella) and decided to bake the dough balls instead of frying them. That said I liked the end result - it was almost like having filled gnocchi!

Ceviche de Pescado (Fish Ceviche)
Serves 6 as a “starter” or lunch portion. Serves 3 as a dinner.

Directions:
1. Slice the fish into pieces between 1/2 inch and 2 inches depending on your preference. Place the fish in a non-reactive, shallow plan in a thin layer. Season with salt and pepper.
2.  Supreme the grapefruit into the dish with the fish.
3. Combine the grapefruit and lime juice, jalepeno, cilantro and garlic. Pour mixture over fish and grapefruit. Stir lightly to expose all the fish to some of the citrus juice mixture.
4. Put sliced onion on top of fish as it “cooks."
5. Let fish stand for 10 minutes or longer depending on your preference.

Directions:
In order to save time, you can prep the potatoes, and while they are cooling, make the filling. While the filling cools, make the potato “dough.” In this way, little time is spent waiting for anything to cool.

For the dough:
1. Pierce the potatoes with a fork, then place them in a bowl and cover with saran wrap. Heat in the microwave for approximately 8 minutes. Once they pierce easily with a fork, they are done.
2. Place on a plate and cut in half to speed cooling.
3. Peel the potatoes as soon as you can handle them and mash them with a potato masher or force them through a potato ricer (preferred).
4. Add egg, salt and pepper and knead “dough” thoroughly to ensure that ingredients are well combined and uniformly distributed.

For the filling:
1. Place 1 tablespoon of oil in a saute pan and heat over medium. Once hot add the proscuitto and brown it (about 5 minutes). Remove from the pan and place on a paper towel covered plate to drain.
2. Wipe out the pan leaving only a thin coating of oil. Add the red bell pepper and saute 3 minutes. Add the spinach and saute until it wilts.
3. Turn off the heat, add the mozzarella and proscuitto and toss to combine.
4. Allow filling to cool before forming “papas.”

Forming and baking the papas:
1. Preheat the oven to 350 degrees farenheit.
2. Use three small bowls to prepare the papas. In one, combine flour and salt. In the second, a beaten egg with a tiny bit of water. Put bread crumbs in the third.
3. Flour your hands and scoop up 1/8 of the total dough to make a round pancake with your hands. Make a slight indentation in the middle for the filling.
4. Spoon a generous amount of filling into the center and then roll the potato closed, forming a smooth, ball-like casing around the filling. Repeat with all dough.
5. Dip each papa in the three bowls to coat: first roll in flour, then dip in egg, then roll in bread crumbs.
6. Place papas on the baking sheet and spray the exterior with oil.
7. Bake the papas in the oven for 25-30 minutes, flipping once in the middle. Eat on them on their own, with spaghetti sauce or over salad. 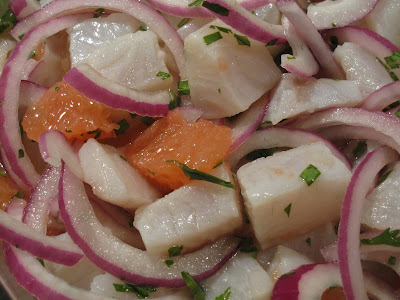 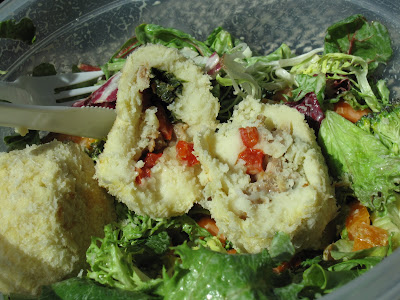