Last summer Leslie made Thomas Keller's Confit Byaldi when we viewed Ratatouille and in my frenzy to host the aforementioned Gossip Girl Season Premiere party I decided its deliciousness was the perfect way to incorporate peak seasonal produce and stay in theme. She warned me it took HOURS to prepare but as usual my denial about how long cooking projects will take caused me to think I was superhuman and could create this dish in a mere afternoon. Ha! I was wrong again.

The piperade, chopping and arranging alone took the afternoon... By the time I was ready to cook it at 275 degrees Fahrenheit for 2.5 hours (after which point I could hold it according to the recipe) I was already late leaving for Vika and Rafe's to watch True Blood's season finale. Into the fridge it went, instructions be damned. After I came home I cooked it overnight using my alarm clock at the appropriate intervals. My only change to the recipe was using my dutch oven instead of foil and a dish with lower sides. In the end, it came together and was as sweet and rich as I remembered, but I think Leslie's version was better. I blame my timing in combination with the dutch oven being too large to squeeze under the broiler.

To be honest, I probably won't make this again as I was perfectly content with Smitten Kitchen's simpler version last summer and/or any improvised ratatouille (adding things like radishes, peppers and whatever else might be in the fridge) I've put together since without writing about it. In this case, less time for a great taste wins for me. But if you make it...invite me over to enjoy it please! 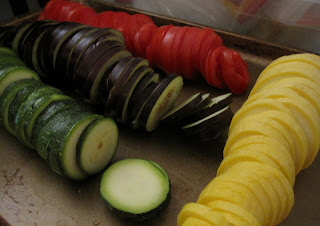 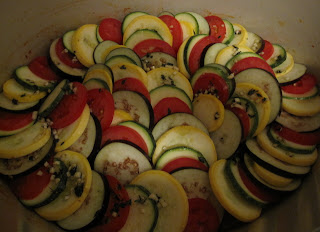 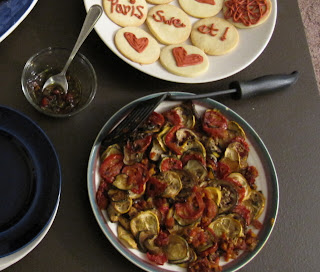