Lime-Vanilla Cupcakes with Cucumber Buttercream sound strange, right? But I promise the only thing they are is strangely delicious. The cupcakes are very light, the cucumber buttercream is refreshing and you'll want to eat them all immediately. Gale and Kimberly said they were the best cupcakes I had ever baked and Kimberly asked that I forward the recipe to her Mom. This one is a keeper.

Almost as exciting as enjoying cupcakes was the fact that I successfully managed to halve a recipe. Perhaps relearning math is working! My only tweaks beyond halving the recipe were increasing the vanilla extract to its 1 teaspoon level and using a mixture of plain soymilk and heavy cream in lieu of regular milk as I didn't have any on hand.

On an separate note, I won the contest Cathy at Not Eating Out in New York hosted a few weeks ago and will be attending Just Food's Let Us Eat Local event tonight. My recipe also will be published in Just Foods' Veggie Tipsheets. I couldn't believe it but I'm very thankful. Best wishes to the other three people who entered the competition, which Cathy recapped here. 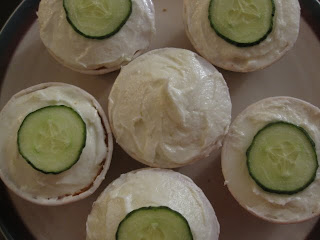 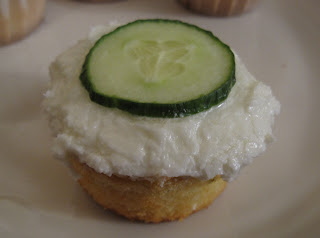