The September 2010 Daring Cooks’ challenge was hosted by John of Eat4Fun. John chose to challenge The Daring Cooks to learn about food preservation, mainly in the form of canning and freezing. He challenged everyone to make a recipe and preserve it. John’s source for food preservation information was from The National Center for Home Food Preservation.

This challenge was very intimidating! Canning has been an idea that interests me but also one I've found a reason to avoid. John's challenge left me with no excuse but to face my fear and his meticulous instructions must have left no room for error because I'm the proud owner of a pint of canned apple butter.

My biggest struggle was how to extract the canned applebutter, keeping it level, from my stockpot after the boiling and cooling... I'm very lucky it sealed as I dropped it on its side several times back in the water before realizing I needed to carefully use both the tongs and the spatula, which barely worked. Water creates a lot of drag. Any tips on how to get canned goods out of the water?

In retrospect, I should have purchased two 3 pound bags of apples if I was going to go through the whole process but even having one successfully canned item is exciting. Nevermind that I never want to open the jar as staring at it makes me so happy. Fortunately, I saved the other half of the applebutter and am enjoying it homemade baguette slices, plain yogurt and/or by the spoonful. It's a delicious, cinnamon spiced fruit spread that is perfect for Fall without any added sugar. Even if you don't want to can it, you should make some applebutter to celebrate the new season. 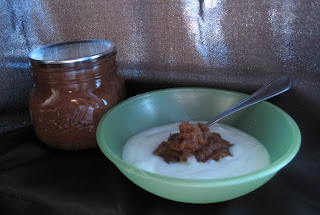