The weekend before last Courtney and I made a fantastic dinner using two of Kayln's recipes:
Roasted Wild Salmon with Soy-Wasabi-Agave Glaze and Green Onions and Wilted Spinach Salad with Edamame, Red Onion, and Black Sesame Seeds. It was probably one of the fastest, tastiest dinners ever cooked in my kitchen! Way to select excellent bookmarks from my list, Courtney!

This salad is exceptional. The caramelized onions' sweetness, the savory-sweet dressing and the toasted sesame seeds' crunch work wonders on the spinach making what could have been another spinach salad a rich, textured eating experience. We used Kayln's recommended substitutions for the recipe: unseasoned rice vinegar instead of white balsamic, agave nectar instead of honey and canola oil instead of peanut oil.

It 100% overshadowed the poor salmon, which was tender and flaky yet a little disappointing. I thought the flavor would pack more of a punch given the straight wasabi... This might be my fault as the rub and Wasabi I had were not the freshest in the world, but I'm going to act like the issue had more to do with the salad being so amazing that the salmon paled in comparison. ;)

I might make the salmon again with fresh Wasabi to see if it makes a difference but repeating it won't be a priority. The salad on the other hand I suggest you make now! I ate it twice last week and wish I could eat it again immediately. 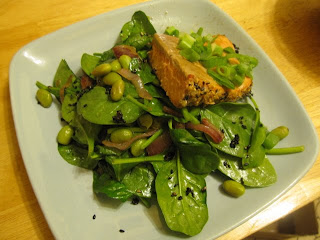 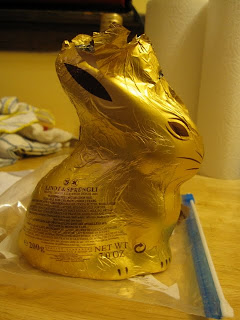 Courtney also shared a delicious Lindt Gold bunny with me. It was promptly beheaded after she left. :)
Posted by Sarah at 12:30 PM