This month I promised myself I wouldn't eat out or eat meat other than seafood. I knew it would be a challenge not to eat out but it is much harder than expected. I hadn't thought about how I planned to define eating out... Is it simply buying pre-made food elsewhere? Or does it include rejecting food other people buy and give to me? It probably should exclude things like the mediocre pizza I had a work meeting but I have trouble declining free anything and the pizza would have been thrown out. The meat thing really isn't so bad though, especially since I'm still eating seafood and I'm not a die hard carnivore in the first place.

Last night Meg improvised a dinner for us. She's a whiz in the kitchen, who cooks intuitively. As a recipe lover this impresses me to no end. She deboned then cooked Chilean Sea Bass with Sesame Oil, Soy Sauce, Marsala Wine, Garlic, Ginger and a decorative Lemon slice over a bed of Spinach in a foil pouch. Once done she had this amazing flaky fish and a silky, Asian-Italian fusion sauce I took far too many slices of baguette to sop up. Since the whole thing cooked a mere 15 minutes the ginger and garlic retained a lot of their bite, which is rare and enjoyable.

My job was dessert. I thought about making 6 different things and then realized I should reign in the dessert making. After all I did eat that Tiramisu basically by myself. To keep things simple I opted to take Meg's suggestion and bring the ingredients for Guinness Floats, which as you can imagine involve Vanilla Ice Cream and Guinness. I like both ingredients separately and the rich, slightly bitter coffee-like flavor of Guinness goes well with the sweetness of ice cream. Given my sweet tooth though I kept wanting to increase the ice cream into a milkshake proportion. Strange as I like Guinness on its own...I guess once I meet sweet I find it irresistible and want more. 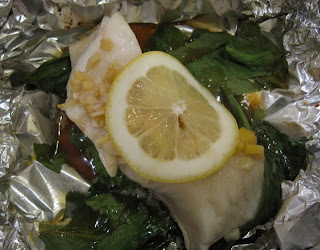 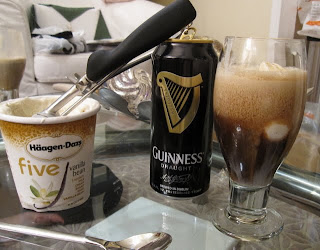