Leslie pointed out Smitten Kitchen's adaptation of Mark Bittman's adaptation of a Jean-Georges Vongertichten Ginger Fried Rice recipe* a while back. It was instantly printed yet I only made it last week. I too really liked the recipe. The dominant ginger flavor gives the rice a nice bite, which then is mellowed out by the egg yolk. It has an amazing, crunchy yet creamy mouth feel and a rich, savory flavor.

I adapted Smitten Kitchen's version of the recipe by substituting 1/4 cup canola oil for 1/2 peanut oil, low sodium soy sauce instead of regular and adding a touch of Sriracha** to the soy sauce and sesame oil mixture for spice. I took "salt to taste" a bit too far, each part tasted fine on its own but together I needed water while I ate, so I'll be toning that down next time. I used brown basmati rice cooked one day in a advance and I didn't bother to mold it into a beautiful presentation. Shocking, I know.

A plus to this recipe is you can get away with using a mere two dishes and really only one each day since the rice should be aged, which puts this recipe on par with its beloved cousin Sesame-Garlic Soba Noodles. I might one day seek out the original but for now it is safe to say this will go in my semi-regular meal rotation as is (which really means I'll make it once a month or something ridiculously rare like that).

*As I typed all the adapation's out I couldn't help but think of the numerous times in the Bible where they list genealogies of who begat who... They were always so tedious to read. I skimmed them.
**On a side note did you realize Sriracha is made in the U.S.? Fascinating. I really want to try the Jean-Georges Vongertichten recipe linked to that article as well. 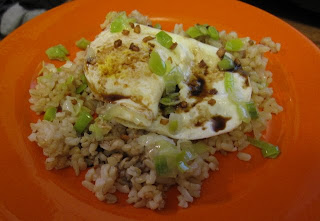