Gnocchi's texture lets me imagine I'm eating cookie dough while feeling healthy since being savory it skips sugar. Obviously that's awesome and makes it one of my favorite foods. I received a potato ricer for  Christmas, requested with the goal of making my own gnocchi, and just put it to use Sunday night.

I followed 101 Cookbook's recipe for Cooking Gnocchi Like An Italian Grandmother and found the instructions easy to understand. Riced potatoes are light, fluffy and look like Play Doh hair. While time consuming making gnocchi was easier than expected... For a first attempt I figure the most important thing is that they floated after being cooked, didn't disintegrate and had the requisite doughy texture. :) I definitely need to keep practicing to get the appropriate size and shape.

Instead of keeping it simple and pairing the gnocchi with tomato sauce, I decided on Red Cabbage, Roasted Jerusalem Artichokes and Garlic, a tasty mixture on the slightly sweet side of savory. The cabbage's crunch, roasted garlic's richness and the slightly peppery, nutty finish of the Jerusalem Artichoke contrast well with  Gnocchi's smoothness but the "sauce" needed to be a bit thicker or to not exist. I'm not sure which yet.
Approximate recipe for my accompaniment... Preheat the oven to 475 while dicing a medium onion, not too finely, peeling and thinly slicing Jerusalem Artichokes and Garlic. Toss these items with Olive Oil, Salt and freshly Ground Pepper, then roast approximately 30 minutes until slightly crisp and caramelized. Set aside  Jerusalem Artichoke pieces to top the plated dish. Next add half a head of thinly sliced red cabbage to the roasting pan and pour in roughly 2.5 cups of Trader Joe's Organic Vegetable Stock, salt generously if you use low sodium broth. Roast this mixture in the oven for approximately 30 minutes taking it out and turning the cabbage occasionally so it cooks evenly.

Next time I will probably saute the onion and red cabbage, set it aside, and then use the broth to make a real sauce that would coat everything better. I may also try veggies that impart less natural sweetness. Anyway, if you decide to try the rough recipe don't put the gnocchi in until you are ready to eat as mine turned a bit lavender, which tasted fine but looked strange. 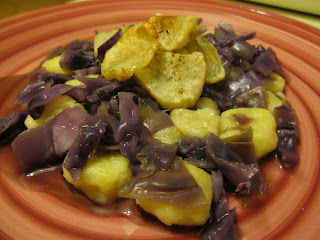 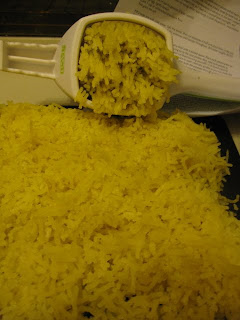