Much better than the doughnuts was my first batch of Pumpkin Butter! It not only dressed up/salvaged the doughnuts but it also tastes great on its own, spread on bread or stirred into yogurt for breakfast. Plus it is full of that pumpkin pie spice everyone craves this time of year.

I started from Sarah's recipe using the white pumpkin I picked up during a girl's weekend in the Catskills. I hadn't seen a white pumpkin before but I found its flesh to taste the same as an orange one though it had more of a brown tinge. My changes to her process were substituting maple syrup for white sugar, amping up the cinnamon and cloves and cooking the butter for a mere hour or so over on low on the stove instead of for 8 hours in a slow cooking. The result was lightly sweetened, super smooth bliss. No question this project is worth the time it takes!

When you scoop out the pumpkin's insides be sure to save and roast the seeds for a salty, crunchy and, somehow, healthy snack that will have you wishing you ate whole pumpkins and squash more often. I used Mama Pea's recipe this time and found the addition of vinegar to the usual mix of olive oil and salt to be a good one.

1. Preheat the oven to 350 degrees Fahrenheit and spray a baking sheet with olive oil.
2. Cut the pumpkin in half and use a large spoon to scoop out the seeds and pith inside. If you want to roast the pumpkin seeds, save them.
3. Place the pumpkin cut side down on a baking sheet and roast until soft, approximately 30 minutes.
4. Scoop the cooked pumpkin flesh into a food processor and blend until smooth. Add flavorings to taste.  I went with 1/2 cup maple syrup, 1 teaspoon cinnamon, 1/4 teaspoon cloves, 1/8 teaspoon each nutmeg and ginger for each cup of pumpkin.
5. Transfer the seasoned puree to a large pot and cook on low heat, stirring occasionally, for an hour (or until it reaches the desired texture). 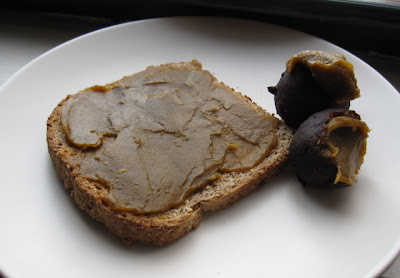 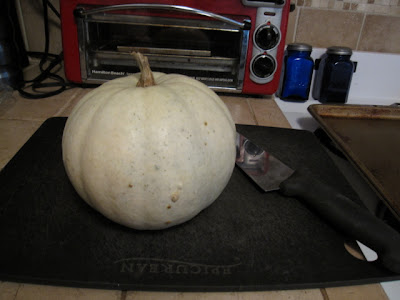 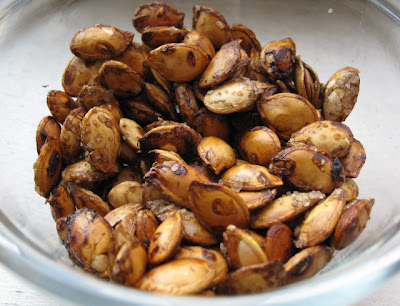