One of my favorite treats growing up in Richmond, Virginia was fresh bread from Montana Gold Bread Company in Carytown. Going to get new pointe shoes at Ellman's inevitably ended with a thick, sample slice and a few loaves coming home. When I saw Cassie from How To Eat a Cupcake and Flour Child Bakery post this Cinnamon Swirl Bread I was brought back to their Cinnamon Swirl Bread and bookmarked the recipe confident that I could bring a version of Montana Gold's bread to my Brooklyn kitchen.

My only changes to the recipe were spreading a bit of canned pumpkin between layers in lieu of raisins  (because what isn't pumpkin good in?), rolling it up without the topping and having to unroll it (oops) and letting it rise overnight in the fridge, which didn't hold it back in the least as this bread was a prodigious riser. I'm not kidding. It's strength buckled my silicon loaf pan.

The resulting loaf was an excellent likeness to the one in my memory -- light and fluffy in texture and slightly sweet. It was great on its own fresh or toasted with a bit of butter later in the week. To get a feel for it imagine the texture and size of Texas Toast only replace the garlic and butter with a sweet swirl. My only change next time will be having more space to roll out the dough, so there will be more of a swirl in my end result! You've got to try it.

Other excitement: I have two new readers! Thanks for signing on y'all. I also ran my first 8k this past weekend; thanks to a friend's pace setting skill there were no stops or walking breaks and we finished in 58:20. I didn't think a 5k outside was possible much less an 8k. :)

Pumpkin Cinnamon Swirl Bread
From Joy of Cooking via How To Eat A Cupcake
Yield: 1 loaf

Finishing
1 Egg
Salt
1. Combine yeast and water in a large bowl or bowl of mixer and stir. Let stand for five minutes until yeast dissolves. Meanwhile, oil a large bowl.
2. Add the remaining ingredients, except for the flour and the aforementioned teaspoon of butter, and mix for 1 minute on low speed. Add the 3 1/2 cups of flour a 1/2 cup at a time, until dough pulls away from the sides of the bowl yet sticks to its bottom. If needed, continue adding a tablespoon of flour at a time until you reach the right consistency.
3. If using a mixer with a dough attachment, switch to it and knead for about 10 minutes on low to medium speed until the dough is smooth and elastic. If kneading by hand, sprinkle the counter with flour and knead the dough until smooth and elastic.
4. Place the dough in the prepared bowl and turn it over once to coat. Loosely cover with plastic wrap and let rise for 1 1/2 to 2 hours or until doubled in volume.
5. Open the can of pumpkin and scoop out 1/2 cup in a small bowl. Mix the cinnamon and sugar for the filling.
6. Grease an 8 1/2” x 4 1/2” loaf pan. Melt the reserved butter. Punch dough down. Roll the dough into an 8” x 18” rectangle about 1/2” thick. Brush the surface of the dough with the 1 teaspoon of the melted butter. Sprinkle all but 2 teaspoons of the cinnamon sugar over the dough and spread the pumpkin as evenly as you can over the surface. Starting from one 8” side, roll up the dough and pinch the seam and ends closed. Place seam side down in the pan. Cover loosely with oiled plastic wrap and let rise until doubled in volume, 1 to 1 1/2 hours.
7. Preheat the oven to 375 degrees Fahrenheit. Whisk egg and salt together and gently brush over the top of the loaf. Sprinkle the top of the dough with the remaining cinnamon sugar. Bake until crust is deep golden brown and the bottom of the sounds hollow when tapped, 40 to 45 minutes. Remove loaf from the pan onto a cooling rack. While the bread is still hot, brush the top with the remaining melted butter, then let it cool.
8. Once cool, slice and enjoy. 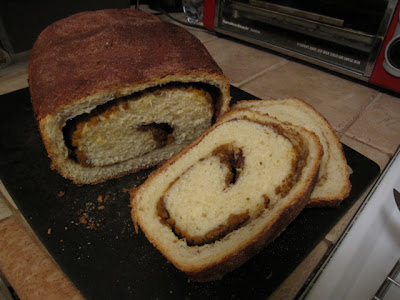