On September 19, I impulsively bought New York State Concord Grapes thinking I'd try Deb at Smitten Kitchen's Grape Foccacia with Rosemary. While I threw them into sauce for sauteed pork then, I didn't attempt the recipe until last weekend and that only happened because the grapes were showing signs of shrivel! This was my second attempt at a Foccacia-style bread and while it went better than my first where the dough ended up like dinosaur skin it just didn't live up to Luca of the Cavatappo Empire's.

The focaccia's flavor is delicious and the unexpected combination of grapes and rosemary satisfies your desire for sweet and salty in one bite, but it's lack of levity made me think of pizza dough. At first I thought it the density might have come from my mistakes following the recipe -- adding 6 tablespoons of oil to the dough instead of 2 due to poor reading and leaving it in the fridge to rise for almost 14 hours -- but Deb's pictures while much more stunning than mine reveal the same height.

I want my focaccia to be thick and fluffy, so I'll have to keep trying other recipes. Plus halving and seeding all those grapes was too tedious for my taste. It was more fun to be less lady-like and to enjoy them by popping them in my mouth and spitting out the seeds. 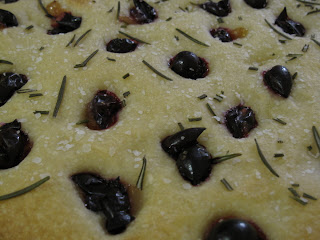 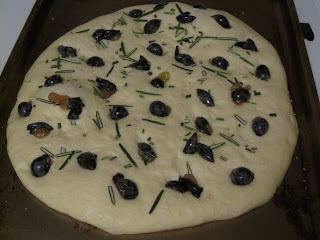 Email ThisBlogThis!Share to TwitterShare to FacebookShare to Pinterest
Labels: bread