The January 2010 DC challenge was hosted by Cuppy of Cuppylicious and she chose a delicious Thai-inspired recipe for Pork Satay from the book 1000 Recipes by Martha Day. Cuppy was a generous host, who allowed a lot of wiggle room to us Daring Cooks. The only required element for this challenge was marinating the chosen meat.

I used the faster (cheaper) marinade listed below, substituting lime juice for lemon as I had a lime handy, on pork butt. In keeping with all the advice I’ve heard pork butt, clearly an area that gets lots of exercise on the pig, was a cheap cut of meat ($2.99/lb at Whole Foods). It isn’t something I ever expected to cook but it turned out very tasty after nearly 24 hours of marinating and the broiling. The meat was extremely tender with a rich flavor spicy enough to leave my lips burning a touch. Though I’m not sure the tingling was the norm or if it was the result of my lips’ tenderness due to the cold.

The peanut sauce was really easy to make, especially since I used a 1-cup measuring cup and the microwave to make it happen. My low powered microwave, which won’t even pop popcorn really, took about 2.5 minutes of 30 second intervals followed by stirring to dissolve the peanut butter creating a creamy sauce. I wasn’t sure I would like the peanut sauce but I did. Peanut butter as one would expect from the name was the predominant flavor.


I served myself the satay on a bed of coconut rice, which neatly used up the other half of the 15 oz. can of light coconut milk, surrounded by blanched broccoli. I didn’t feel like the satay itself needed the sauce since it already had so much flavor, but it was delicious on my blanched broccoli (even if it didn’t look so appetizing). The coconut rice is very coconut and sticky by the way. I've hung onto that recipe for years.


The most exciting aspect of this project and my chosen sides was that had I done it in one night I think I could have completed everything at the same time without any issues, excluding the meat’s marinating time. I’ll be revisiting this to test that theory and because it was delicious and economical. 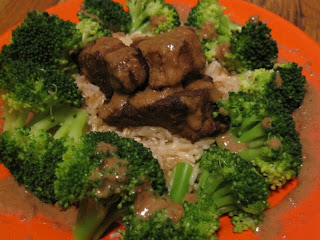 Feeling the need to make it more Thai? Try adding a dragon chili, an extra tablespoon of ginger root, and 1 tablespoon (0.5 oz or 15 mls) of fish sauce. (I keep some premature (still green) dragon chili peppers in the freezer for just such an occasion.)

Directions:
1a. Cheater alert: If you have a food processor or blender, dump in everything except the pork and blend until smooth. Lacking a food processor, I prefer to chop my onions, garlic and ginger really fine then mix it all together in a medium to large bowl.
2a. Cut pork into 1 inch strips.
3a. Cover pork with marinade. You can place the pork into a bowl, cover/seal and chill, or place the whole lot of it into a ziplock bag, seal and chill.

Directions:
1b. Mix well.
2b. Cut pork into 1 inch thick strips (2-2.5 cm thick), any length.
3b. Cover pork with marinade. You can place the pork into a bowl, cover/seal and chill, or place the whole lot of it into a ziplock bag, seal and chill.
4. If using wooden or bamboo skewers, soak your skewers in warm water for at least 20 minutes before preparing skewers.
5. Gently and slowly slide meat strips onto skewers. Discard leftover marinade.*
6. Broil or grill at 290°C/550° F (or pan fry on medium-high) for 8-10 minutes or until the edges just start to char. Flip and cook another 8-10 minutes.

* If you’re grilling or broiling, you could definitely brush once with extra marinade when you flip the skewers.

Directions:
1. Mix dry ingredients in a small bowl. Add soy sauce and lemon, mix well.
2. Over low heat, combine coconut milk, peanut butter and your soy-lemon-seasoning mix. Mix well, stir often.
3. All you’re doing is melting the peanut butter, so make your peanut sauce after you’ve made everything else in your meal, or make ahead of time and reheat.
Posted by Sarah at 9:30 AM