The January 2010 Daring Bakers’ challenge was hosted by Lauren of Celiac Teen. Lauren chose Gluten-Free Graham Wafers and Nanaimo Bars (in honor of the 2010 Winter Olympics in Vancouver) as the challenge for the month. The sources she based her recipe on are 101 Cookbooks and http://www.nanaimo.ca/. As I don't have dietary restrictions and am on a budget, I did not make the gluten-free graham wafers. You can find a PDF of the information we received (and the recipes) here.

This challenge provided me with a new dessert recipe and the experience of making crackers, which I'll talk about later, but more importantly it reminded me of/made me more aware of the challenges faced by those living with Celiac disease. For Lauren to eat these bars, that she once could pick up at almost any grocery store in Canada, she had to create a recipe to make gluten-free graham crackers and now has to make the crackers and the bars using them in the base every time. As you can see from her blog she handles the challenge her illness provides with grace (and probably eats better than most of us) but is is not something I can imagine dealing with...after all I can't even get myself to eat less sweets, my eternal goal.

I made this month's challenge in Vika and Rafe's well equipped kitchen Sunday while listening to the Jets game, visiting and taking full advantage of Vika's help and her digital SLR/photography skills. It took about 5 hours, including rest times, to complete both aspects of the challenge. I suspect if my original graham cracker dough hadn't been so dry and crumbly it would have been quicker as my paralyzing fear of failure wouldn't have kicked in and dragged things out.

I ended up putting the first batch of graham cracker dough in the oven figuring it didn't matter if it was a crumbled, rolled out mess since I was trying to create crumbs. After a consultation with Mom, Vika fixed up the second half of the dough using 3 teaspoons of milk. It made all the difference in the world as you can see below. Both sets of graham crackers were delicious though I was shocked by how sweet a mere 1/3 c. of honey could make them. When I make these in the future, I will definitely continue to leave off the cinnamon-sugar topping as they don't need added sugar.

The bar portion of the challenge was a breeze in comparision to the graham crackers. My only changes to the Nanaimo bar recipe were substituting vanilla Jello pudding mix for the Bird's custard powder and using at least a half cup less of confectionary sugar for the filling. I cut the nanaimo bars into 1" x 1" cubes as they were so rich. Yet I keep eating them in multiples as they are so delicious so perhaps I could have cut them bigger. I love the creamy buttercream filling's contrast with the crunchy graham cracker-coconut-almond-chocolate base.

Per Lauren these bars freeze well. I hope that is true as I had to put the remaining bits in the freezer to stop myself from eating them. Fingers crossed on that working. I'd recommend making these and you could even cheat to make the whole process easier by purchasing store bought graham crackers (though I think making them on your own is definitely worth a try). Thanks for a great challenge, Lauren! 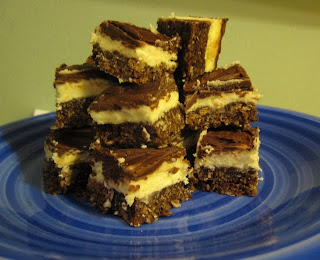 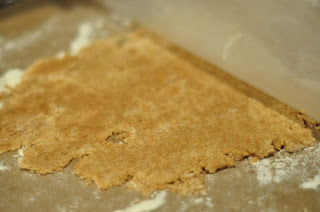 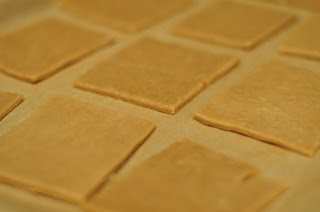 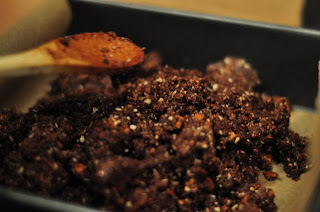 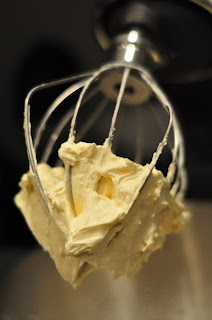 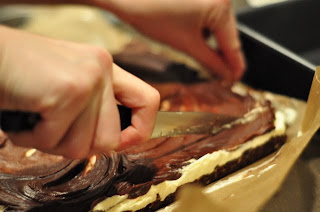 Cutting the Finished Bars
Posted by Sarah at 12:30 PM