I'd rather not admit it, but my first big cooking project of the New Year was a bit a failure. The braised beef was/is edible but not delectable, which was a shame as it smelled heavenly slow cooking for 3.5 hours.
It probably has to do with the original recipe calling for a foil packet and bone-in chuck roast and my choice to use a dutch oven and tri tip roast.

But I really don't understand how that would cause the meat to be so dry and the sauce to be so thick. It isn't like there was a place for the liquid to evaporate and the meat did have some fat, even after I trimmed the silver skin and excess off it. This is me sighing and sulking and suffering through numerous meals of this nightly.

The sauce was sweeter than I would have liked so I won't revisit this particular recipe again, in spite of seeing that numerous people had success following the recipe and loved it. But I will braise again one day when I'm feeling like eating a lot of meat. Clearly not this is not something I will do for others until I fix my technique and find a recipe that is a winner for me.

I did enjoy the mashed rutabagas and potatoes, which looked like sunshine, and were delicious. I just boiled one peeled rutabaga (a new veggie for me!) with three medium peeled red potatoes for approximately 15 minutes, smashed everything together with a large serving spoon and, mixed in a little half and half, salt and pepper. Easy, satisfying and even somewhat nutritious since the rutabaga was in there and I didn't use butter. The simple salad (baby arugula, carrot strips and onion) was dressed with a honey-lemon-tarragon-olive oil dressing, not a vinaigrette as I forget the vinegar, and the dressing was a nice sweet contrast to the arugula.

I'll definitely revisit these thrown together super simple, side dishes. Happy 2010 y'all! 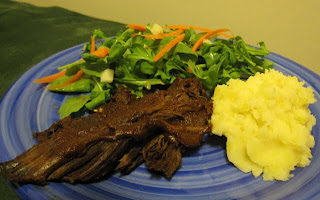