After two and a half years of discussion, no lie, Courtney and I finally had a cupcake together. When choosing the bakery, my biggest priority was finding somewhere with enough space to sit and catch up. Bakeries typically require the grab and go, but it was too cold to walk around outside (can't wait for that weather to get here).

Based on Yelp reviews, I chose Sweet Revenge. The large windows and white walls help the space feel airy, even though it was carefully filled to the brim with seating for about 15. There was a little bit of a wait and service wasn't 100% due to a high volume of customers, but the most important part - the cupcakes - was good!

Courtney had the Dirty (Valhrona Chocolate Cake with Dark Chocolate Truffle) with a cappuccino and I had the Pure (Mexican Vanilla Cake with Mexican Vanilla Icing) with milk in a wine glass. The cupcakes came wrapped carefully in paper rather than in a traditional cupcake wrapper. We agreed the cake was moist; it left that yummy residue on the cupcake paper, which is always a good sign for me. You could actually taste the vanilla in the cake and frosting, rather than just enjoying something sweet. I especially liked the frosting. It was not cloying and had large sugar crystals on top for texture.

Sweet Revenge paid a lot of attention to details that enhance the experience. I will definitely make a return visit. I want to try their namesake cupcake the Sweet Revenge. 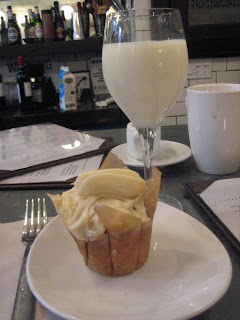