I knew I wanted to make something with Cauliflower last weekend, but didn't know what. Soup was my first thought since my stockpile of broth was/is taking up most of the space in our petite fridge, but all of my bookmarked soup recipes called for expensive extra ingredients i.e. blocks of cheese, creme fraiche, wine, and all that good stuff. I could have roasted it, which reminds me of healthier popcorn, but it would have only filled me up for a night.

No good. I wanted an economical meal option. Once again the internet solved my problems by turning up a recipe for Ziti with Tuscan-Style Cauliflower. I purchased the ingredients for a half portion, which actually resulted in four meals. I don't know what kind of servings they think people need!

Once the cauliflower was cut, the dish was quick and easy to put together. I couldn't taste the mint (at least it added color), but the hint of red pepper provided a pleasant kick to a simple, satisfying meal. I blocked out the ziti part when purchasing ingredients, illustrated below, but followed the recipe exactly otherwise. I would highly recommend it, especially as for the second week in a row Lauren found something I cooked appetizing in appearance. 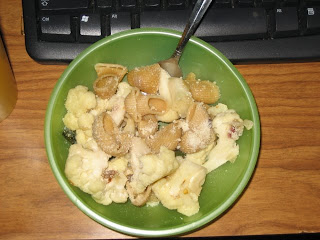