I tried sauteing some thinly sliced heirloom radishes from the Greenmarket in the leftover miso butter to use it up, which should have been a great plan... Only the miso butter gummed up on the bottom of the pan and started to turn a nice charcoal. Fortunately the caramelized radishes were salvageable.

I pulled out a new pan, spritzed it with Trader Joe's Canola Oil and was good to go with the second half. Once the new radishes were hot I added them to the other radishes in the container with the leftover miso butter, a much better idea. It melted by the time my egg swirled with a little cream was done cooking into a little pillow (the pan was perhaps too hot).

I piled everything onto a Trader Joe's Whole Grain Tortilla, super soft and slightly sweet, and had a very tasty dinner than cleaned out several things on their way out in the fridge.I really like how the miso paste confuses my taste buds into thinking of cheese. I think it might work as a sandwich spread used sparingly, but I probably should compare the nutrition facts to other options before I try it.

Oh and if you aren't a fan of radishes and their bite but want to learn to eat them sauteing might be a good start! It really mellows out their sharpness. 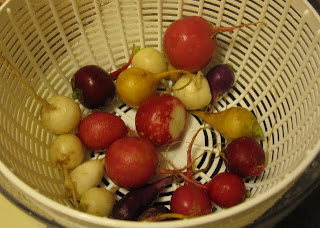 How pretty were these? I had to have them! The lighting in my kitchen doesn't accurately reveal the colors but they were red, eggplant purple, fuchsia, yellow and white!
Posted by Sarah at 12:30 PM