Way back on May 2 I volunteered to help stuff gift bags for LUCKYRICE's Grand Feast and ended up with the privilege of attending. The restaurant line up was amazing and the dishes they served, though I didn't manage to try them all, were a great taste of Asia. My favorites tastes were the crispy, rich Manchurian Cauliflower Indian-Chinese Style from Dévi's Chef Hemant Mathur, the creamy, salty melt-in-my mouth Grilled Wagyu/Congee/Sweet Soy from morimoto and the crisp, clean Spice Crusted Steak, South Indian Rice Salad, Horseradish and Yogurt from Tabla's Chef Floyd Cardoz. I also loved The Summit Bar's cinnamon-y Charmane Star beverage.

Being shy I wasn't too aggressive with my photos but I did capture one of the media highlights: Chefs Masaharu Morimoto and Daniel Boulud joking around behind the morimoto station. I also was very excited to talk briefly with Chef Cardoz as I'm a big fan of Tabla (I raved about my first visit of two here). It was a swoon-worthy night made even better by getting to wear cocktail attire and experiencing the amazing view from the Mandarin Oriental's 36th Floor. Thanks so much to Courtney for the opportunity. :)

Afterward Meg and I decided we needed dessert in spite of having many savory bites at the event... I just can't resist ending the event on a sweet note. Miraculously I remembered Kyotofu, a Japanese dessert bar and bakery in the area that would keep us in theme. As you might imagine most of the menu items involve tofu though while eating them that is the last thing on your mind.


As with most places in New York, Kyotofu is small and true to stereotype it has a very modern, white aesthetic with hints of bright light that make it inviting rather than sterile. It was quite busy for 9:30-10 on a Saturday night, especially when a bomb threat was occurring just down the street. The service was pretty slow but it was just nice to be off of our heels.

To start we tried ordering some of their chocolate soy milk soft serve only to be told it was take-out only. Fortunately the waiter realized he had crushed my hopes and dreams and surprised us with a cup. It was creamy, cool and just sweet -- the perfect thing while waiting for our real dessert: white sesame cake with a banana filling, banana sorbet on the side and shiro-an cream. The cake was soft and light with a delicate sesame flavor that could be overpowered by the bananas if you didn't scoop carefully. My favorite part was the Shiro-An Cream, which I thought was a vanilla bean paste based on the black flecks but it was actually a paste of sweetened white beans.

After running into friends of Meg's we got to sample another of Kyotofu's beautifully presented desserts as well: a super rich, miso brownie set in an exotic miso caramel. The brownie was dense, rich and perfectly chocolate; I couldn't taste the miso so it must have just added the brownie's consistency. I would definitely return to Kyotofu if I were in the area. Everything, except the service, hit the sweet spot just right. 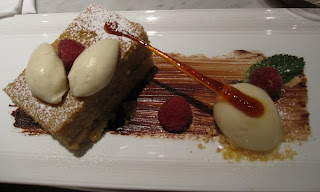 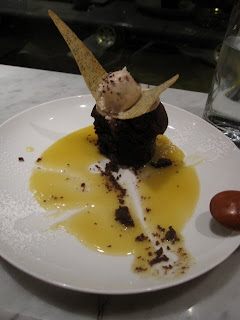 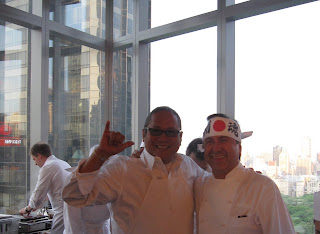 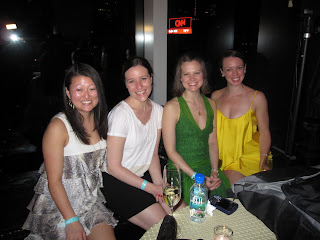