Smitten Kitchen's Mushroom Bourguignon is a hearty, visually appealing dish. I served it to Leslie and Danielle a few Sundays ago with a spinach, red onion and bosc pear salad topped with a homemade lemon-feta-bsalmic vinaigrette and the leftover red wine as a one course meal.

Mushroom Bourguignon smells heavenly when cooking and as long as you aren't fastidious about your dicing, which of course I was, it is low maintenance to make though not particularly quick. I don't think I have ever before enjoyed portabellos as much as I did in this preparation. They are so juicy, tender and thick that they resembled yet trumped any stewed meat I've consumed.

My only change to the recipe was using Trader Joe's Low Fat Greek-Style Yogurt instead of Sour Cream to top it. When I enjoyed the one leftover portion the following day, I skipped the yogurt entirely as I didn't find it to make a significate difference to my palate. The fresh parsley garnish, however, is as must have. It adds a light note to an otherwise rich dish.

This was my first time using the dutch oven I purchased back in August (there was a bit of time involved in getting it from Va to NYC but thanks to Val, Vika, Rafe, my limited arm muscle and the MTA Transit system it arrived to my apartment) and I'm as happy with it as I thought I would be. I can't wait to try out other recipes where I can take advantage of its stovetop to oven functionality. It will be perfect for winter. 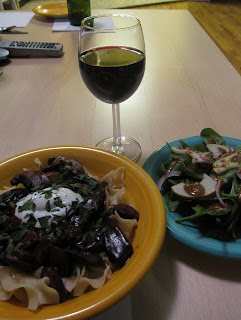