Last month immediately before Spain I took the plunge and signed up for The Daring Kitchen Challenges...Making Vietnamese Chicken Pho a.k.a. "Pho Ga" was my first project. The October 2009 Daring Cooks’ challenge was brought to us by Jaden of the blog Steamy Kitchen. The recipes are from her new cookbook, The Steamy Kitchen Cookbook.

For me Pho's golden broth is a soothing elixir that helps ward off colds, soothes hangovers and temporarily cures minor troubles like heartache. It brings back dozens of car rides to Pho So 1 in Jim's 3,000 GT during college. I always eat it with way too much S'richa, by accident, so my nose runs endlessly throughout the meal. Charming, I know.

Making Pho was exciting and intimidating, even if I didn't go with the made from scratch option. The biggest obstacle for me was finding star anise; I went to TEN grocery stores on Saturday and finally tracked it down at Eli's Vinegar Factory. After all that effort, I felt strongly that the Pho should taste like liquid gold. The end result was quite good and I think my ability to prepare it can only improve. My main complaints were the cloudiness of the pre-made stock and not having Thai Basil. These things should be fairly easy to remedy when I try this again and it is only a matter of time until I do that!

If you like Pho Ga definitely try this recipe. It's actually quite easy.

Directions:
1.To make the Chicken Pho Broth: heat a frying pan over medium heat. Add the coriander seeds, cloves and star anise and toast until fragrant, about 3-4 minutes. Immediately spoon out the spices to avoid burning. Char ginger and onion.
2.In a large pot, add all the ingredients (including the toasted spices) and bring to a boil.
3.Reduce the heat to medium-low and let simmer for 20 minutes, skimming the surface frequently.
4.Use tongs to remove the chicken breasts and shred the meat with your fingers, discarding the bone if you have used bone-in breasts.
5.Taste the broth and add more fish sauce or sugar, if needed. Strain the broth and discard the solids.
6.Prepare the noodles as per directions on the package.
7.Ladle the broth into bowls. Then divide the shredded chicken breast and the soft noodles evenly into each bowl.
8.Have the accompaniments spread out on the table. Each person can customize their own bowl with these ingredients. 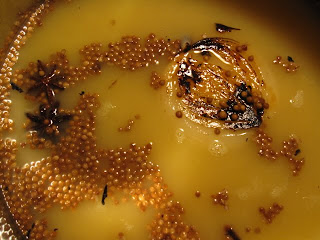 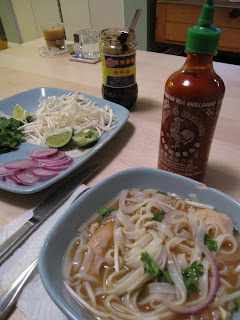