For a year now I've been trying to find a way to eat kale since it is so healthy. I've followed countless sets of instructions off the internet: I've cut it into ribbons, I've steamed it, I've sauteed it and I've even made cashew cream to top it, which was real feat without a food processor. Regardless of the preparation, kale just was too bitter and chewy. Nothing about kale made me happy. I gave up.

Then in early December I ended up taking a GIANT Whole Foods veggie platter home after an event. How could I let that go to waste? It was calling to me to take it home. I found easy uses for the asparagus, carrots, celery, etc., but the whole thing was lined with kale. I had to do something with it, so instead of throwing it away, I tossed it in some chicken vegetable soup I was making. It was in there about 25 minutes simmering. Turns out Kale can be good. It just needs to be cooked until it is very, very tender while retaining it's shape.

Ultimately kale is reminiscent of spinach with more texture, if cooked enough. This made it a perfect complement to another one of my healthy winter concoctions, which I'll definitely recreate at a later date. The flavors of this dish went well together and I liked the crunchy, earthy mouth feel. Plus, I knew everything I was eating was great for my health! It's a full bunch of curly kale cut into ribbons and cooked down, cubed sweet potatoes, skins on, tossed in olive oil, cinnamon and cumin and roasted in the oven, and quinoa. 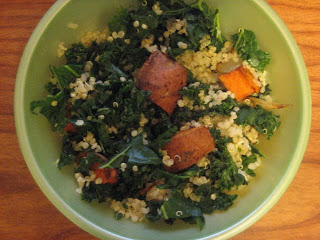