Our initial plan, back when Cajun night was to be held on Derby Day, was making Mint Julep Ice Cream. We tried and unfortunately the custard base curdled putting us back at square one; we blame the tricky advice to check for coating on a wooden spoon. Meg and I became concerned that Cajun night was cursed between the failed planning attempts and now the failed dessert.

But we were determined and started on Paula Deen's Gumbo anyway. Meg made the roux and I did lots of dicing. Everything smelled delicious and then I discovered I left the onion and tomatoes at home, which meant more stairs thanks to our walk-ups. So I headed home to regroup, pick up the ingredients and come up with a new dessert.

In my clipped recipes I stumbled on Every Day Food's Mocha-Chip Meringues and knew I had an easy option that wouldn't require more time at the grocery store. We followed the recipe cutting the espresso, substituting peanut butter chips for chocolate and frantically pulling them out of the oven approximately 8 minutes early due to a burning odor. Fortunately it was just the parchment paper and our curse was broken!

Initially I scooped the meringues with a melon baller, which gave them a lovely consistent round shape, but I ended up using the recommended drop method as meringue is sticky!! Meg smoothed with hot water and we were set. These meringues were great - airy, crispy and thanks to the cocoa marginally less sweet than usual while still completely addictive.

The gumbo was addictive as well - super savory, slightly thick and packed with flavor though not as spicy as expected. Perhaps because we only had a half portion of the andouille? My one warning regarding the gumbo is it takes MUCH longer than the recipe describes. We spent from roughly 2 p.m. until 7:30 p.m. preparing it. Dinner was late but as usual the wait was worth it. I'd recommend both of these recipes. 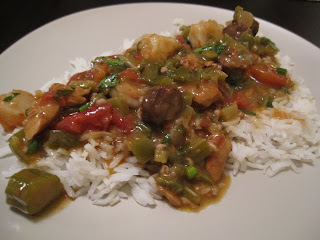 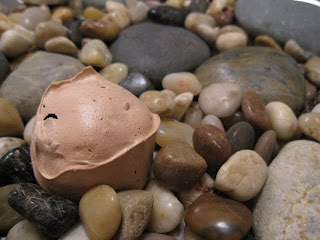 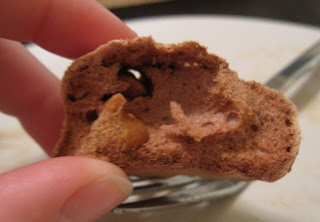