I have a mild obsession with clafoutis. It's so easy, light and delicious (if you use lowfat milk in place of heavy cream) that I want to eat it all the time. Thus the decision to attempt converting this pear clafoutis into last week's breakfast. There is a savory way to make it but I had to have this one. The pears were just so pretty and they are in season.

I convinced myself that adding 3 pieces of crumbled turkey bacon, 1 tablespoon of chopped mint and decreasing the sugar by a tablespoon would make it less dessert-like. That logic was as flawed as convincing myself that the boys I made out with repeatedly while drunk in college and I sort of dated. It doesn't work in reality but the fantasy is enjoyable while it lasts.

This clafoutis presents beautifully and like Nicole at Baking Bites, who developed it, says would be excellent for brunch. I do think it could use less sugar though as the pears, or at least my Bosc pears, are already super sweet on their own. Maybe with more bacon and less sugar there is still hope for it being an acceptable breakfast option? Because every bite made me smile and feel like I was getting away with something and there has to be some merit to starting your day off with that feeling.

If you haven't sliced and cored pears before, I discovered the easiest method to remove the core while retaining the shape is to use a melon baller to scoop out the seeds and then pull out the fibers. Thank you, internet. 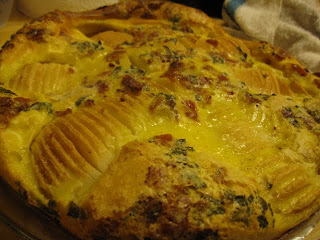