Week 4 covered Compound Salads, Basic Theory and Techniques of Egg Cookery, Perfect Poached Eggs, Beurre Manie, Croutes Scrambled Eggs, Omelets, Whipping Egg Whites and Soufflés. I like eggs but this many egg dishes at once was a bit overwhelming.

After lecture each team prepared their own Salad Niçoise and Soufflé and each person rotated through the omelet and poaching stations. Omelets were eaten immediately; everything else was served in our traditional big meal at 2:30 pm.

Omelets
The term omelet refers to the way the egg is shaped when it comes out of the pan, not the filling inside. French omelets are not browned on the outside; American's can be a little brown. I attempted the French omelet with some minor difficulties including excessive clarified butter, not letting the pan get quite warm enough and starting to overstir into a scramble. The result was still pretty good, though the amount of butter made it almost inedible. I had to pat the omelet down with a paper towel to eat it. Nice.
----
Salad Niçoise
I was less than thrilled that this lesson focused on Salald Niçoise as it has never appealed to me. I was surprised to enjoy it as much as I did. Having been involved with making it, I also now understand why this the salad costs as much as it does. Compound Salads are labor intensive! Two dressings, endless cutting, arranging... By the way, sashimi means the fish is as fresh as possible. I always thought it was a cut of fish.
----
Eggs Benedict
We poached the eggs and Chef Jane did the rest. I feel more comfortable with poaching eggs, but they are going to take practice. My yolk was properly runny, but my whites kept blooming into interesting shapes. I think my transfer from the bowl into the gently simmering water was too slow, giving the white more time to spread out. Regardless this should never happen again! When poaching eggs add enough white vinegar to the water that you can smell the vinegar if you waft the water toward your face.
----
Banana, Lemon and Chocolate Soufflé
Our group chose to make chocolate soufflé. It was challenging, especially since we decided to beat the egg whites by hand until the stiff peak stage. The chef's assistant ended up getting involved, but ultimately they were right because Chef Jane could turn the bowl upside down over her head without them falling on her. The soufflé's end result was warm, rich and light in texture. I think if I practiced enough and had a mixer, this could be an impressive, easy dessert to master. The banana soufflé, my favorite, was the most dramatic. I definitely want to recreate it at home. Maybe with a caramel sauce on the side? Or all the accoutrements of a banana split? The others are a lower priority though still good.

Now for some visuals...

You can't see the full effect of my meticulous arrangement/direction of the arrangement but you get the idea... Yes, the whole class basically made fun of me about the perfectionism. 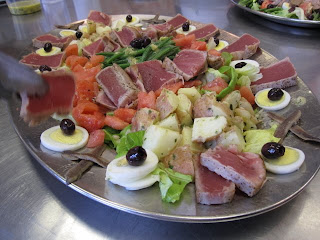 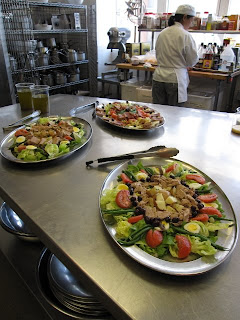 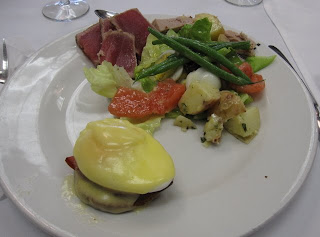 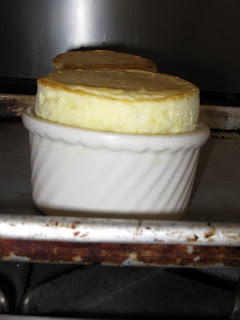 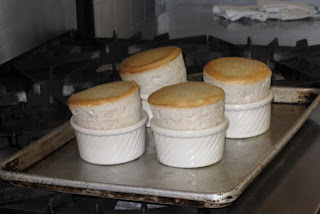 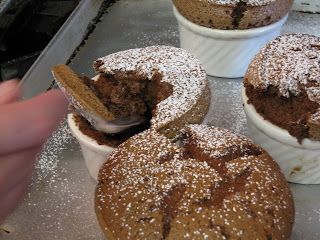