Friday night Meg and I decided to dress up and treat ourselves to a nice dinner. This week was great, but last week pre-DC I was a bit all over the place and I needed a palate cleanser. Our evening at Hearth was fantastically refreshing, although maybe more so without the East Village bar hopping afterward (Cheap Shots was, um, interesting. Aces was better. I'm awful as Skee-Ball though.).

Unsurprisingly, Hearth's decor is warm: red walls, low lighting with candles and wooden tables with lots of room. It was surprisingly loud at capacity, although not overwhelmingly so as we could still carry a conversation without yelling. The service started slow, in spite of our timely seating at 9:00p, but was very attentive yet unobtrusive for most of the meal. Our waitress was very bubbly and had an instant rapport with Meg. It was funny to watch.

Hearth's wine list is very comprehensive i.e. overwhelming. We finally settled on Yellow + Blue's 2007 Malbec thanks to "Wine in the Box" by Justin Timberlake (page 17 here) and Meg's love of Malbec. It is supposedly more eco-friendly due to its Ceres-like juice box packaging and contains 1,000 mL rather than the standard 750 mL. Its rich, smooth flavor took boxed wine to a new level. It also brought up memories of the MTV movie 2gether and one of its hit songs: You + Me = US (Calculus). Ha.

Our meal started with several slices of a hearty, sesame-crusted bread and butter (what I was hungry!) and a complimentary shot of warm fava bean soup, which tasted similar to lentil soup. Both items were delicious.

As I'm never able to resist a deal and have been curious about goat, I ordered the Cucina Povera i.e. their prix fixe menu of humble cooking. It started with an Escarole Salad with Walnuts, Red Onion and Aged Pecorino. I liked the ingredients and the presentation, however, the dressing was strangely sweet and distracting. The Braised Goat was better - a generous portion accompanied by Rapini, Cannellini Beans and Gremolata. The goat had an earthy flavor reminiscent of rabbit or venison, but was dry and the tomato-based Gremolata and creamy Cannellini Beans, the real stars of the course, could only help so much.

While I wouldn't go out of my way to order my starter or main course again Meg's were very impressive. The Pork Terrine was moist with a concentrated, savory flavor and was presented nicely with colorful Pickled Vegetables and House-Made Mustard. But it was nothing compared to the complexity of the Veal and Ricotta Meatballs. My taste melted in my mouth - the flavors were like a wave. The Meatballs came with Ricotta Ravioli, Parmesan and Parsley.

I also loved, loved, loved the dessert we substituted for the one included with my prix fixe: Semolina Pudding with Blood Orange Soup and Pistachios. Semolina Pudding is reminiscent of Panna Cotta, if it contained plumped up raisins, very smooth, creamy and slightly sweet. The Blood Orange soup's rich citrus flavor really made the dessert pop - think of a very decadent marmalade soup with decorative pistachios.

I would definitely revisit Hearth one day. For now though I'll probably continue to vary my self-indulgent dinners as my nonprofit salary is limiting. 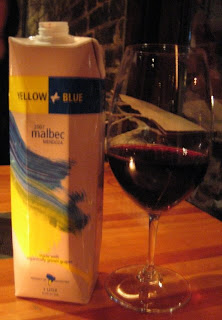 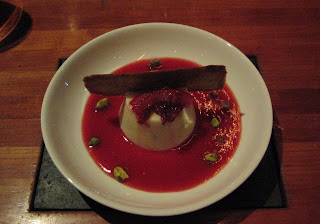